Hooray, finally a new Tuesdays with Dorie post!  Each month the group makes two recipes and participants are supposed to make at least one of them.  I didn't get to make EITHER recipe last month.  For the first recipe, Hungarian Shortbread which is filled with rhubarb jam, I got the date mixed up and anyway it was too early in the season here for the rhubarb the recipe required.  I do plan to make it soon though because it sounds delicious and the people who did make it seemed to really like it!  The second recipe was Pecan Sticky Buns.  Sounds good, but very complicated, and an awful lot of sticky buns for two people to eat since apparently they don't reheat well.  Also neither of us likes pecans in our baked goods.

So I was very happy to join the fun this time around with a recipe called Oasis Naan.  To check out the recipe, visit the blog Always Add More Butter or Of Cabbages and King Cake.  There's also a very helpful two part video that shows the creators of the recipe baking it with Julia Child, as well as a great article with lots of information.  If you've never had it before (I hadn't until tonight!), naan is a type of leavened flat bread served with all kinds of Middle Eastern dishes.  Many types of naan are quite long and skinny, but Oasis Naan is round and puffy around the edges, with coarse salt, green onion, and cumin seed sprinkled on top before baking.  It's baked in a very hot oven until crisp and golden on the bottom with some golden spots on top.  Like I said, this was my first time eating naan, but I thought it was amazing!  The bread itself had outstanding flavor, a wonderfully chewy texture, and the salt and green onion on top was delightful.  I'd imagine the cumin would have been great too if I had remembered to buy it.  Oops!  I love cumin and was a little sad that my naan had to go without, but there's always next time.  Weird as this may sound, I think the dough would make a dreamy pizza crust and plan to try it.  (Update:  I have used this as pizza dough and it is indeed delicious!)

As for the recipe itself, I followed it very closely.  Ended up using an extra half cup of flour in the dough and kneading it in my stand mixer on low for 5 minutes.  The recipe said to let the dough rise at room temperature for 2 hours, but because of timing issues, mine rose for 3 hours and got a little bigger than it was supposed to, though the recipe said it was okay if that happened.  My bread may have been a bit chewier because of this, but it was really, really good anyway and the dough developed a wonderful flavor while it rose.  I did form and bake mine a little differently.  My dough was wonderful to work with and although I started rolling the pieces out with a rolling pin like the recipe said, it ended up working better when I just patted it out with my hands.  As for baking, the recipe said to transfer the naan to a pizza stone or a cookie sheet that had preheated for 20 minutes in a 500 degree oven.  I did preheat my oven and cookie sheet properly, but I don't have a pizza peel or anything so I put my naan on a piece of parchment paper, picked up the paper, and put it on the baking sheet.  It worked out really well this way, though the parchment paper hanging over the edge of the baking sheet got VERY dark!  The cookie sheet also melted my favorite oven mitt when I took it out after the last batch of naan, so watch out for that if you do it this way!

All in all, I really liked this recipe.  It was super easy to make, fun to bake, and tasted great.  If you've never used yeast before, this would be a wonderful recipe to start with because the dough is easy to work with, the rising time isn't too important and it's all the more charming if the finished naan isn't perfectly round!  I served my naan with Indian Butter Chicken and steamed rice and we had a very enjoyable dinner. 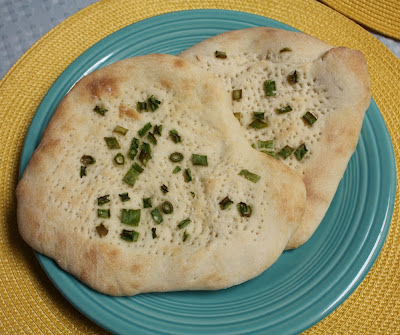 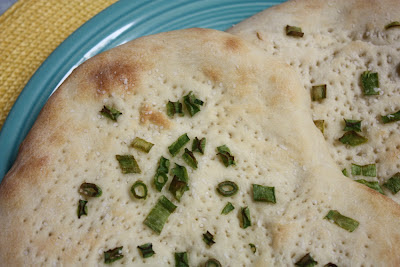 Posted by Cheese with Noodles at 12:55 AM