Ooh, this is an ugly recipe, but it sure tastes good!  This could be breakfast, lunch, or dinner.  The recipe is from AllRecipes.

Posted by Cheese with Noodles at 2:02 PM No comments:

Email ThisBlogThis!Share to TwitterShare to FacebookShare to Pinterest
Labels: breakfast

This recipe is from Martha Stewart and it makes 9 big, fluffy biscuits that were a perfect pair with the apple pie jam I made.  I've only made these biscuits once, but the recipe is good enough to replace my old biscuit recipe.  My only changes were that I didn't need all the milk (no surprise there, since you aren't supposed to just dump in all the milk with any biscuit recipe unless it's drop biscuits), and I chose to make square biscuits.  It's just simpler and faster that way and minimizes how much the dough is handled, but you're welcome to roll the dough out and cut it into rounds if you want.

Flaky Buttery Biscuits
1 3/4 C flour
2 1/2 tsp baking powder
1 tsp salt
6 Tbsp cold butter
about 3/4 C milk
Preheat oven to 450 and line a baking sheet with parchment paper.  Set aside.
In a large bowl, stir together flour, baking powder, and salt.  Cut the cold butter into small cubes and immediately add to the dry ingredients.  Use your fingers or a pastry blender to cut the butter into the dry ingredients until it looks like a very coarse cornmeal.  Pour in 1/2 C milk and stir lightly with a fork, just until the dough comes together.  If it's too dry, you can add the rest of the milk a tablespoon or two at a time.  Knead gently just until the dough looks uniform (this should only be 15 seconds or so), be careful not to over work it.  You want a dough that's just a little tacky.
Dump the dough onto the prepared baking sheet and gently form it into a square about 3/4 inch thick.  Use a knife to cut the square into 9 biscuits.  Leave them touching on the baking sheet, and bake until golden, about 13 to 15 minutes.  Serve immediately.
Yield: 9 large biscuits
Posted by Cheese with Noodles at 2:45 PM No comments:

Email ThisBlogThis!Share to TwitterShare to FacebookShare to Pinterest
Labels: bread

My husband and I went to a you-pick apple farm last month and came home with 8 lbs of apples.  It was the very last day the farm was open, so many of the apples left were extremely tiny (some were as small as cherries) and very, very sour.  We ate the bigger ones as is, but I knew I had to do something involving a lot of sugar with the tiny ones!  So I hit Google and found Apple Pie Jam.  This is actually a combination of two recipes from Taste of Home and Food.com, plus my own inevitable twists.  The basics came from   The original says to peel the apples, but no way was I peeling cherry sized apples.  There would have been nothing left.  A hit with the immersion blender after the apples softened in the pot took care of the skins, and the rosy skins made the jam a lovely color.
And how was the jam?  Great!  Very similar to apple butter, but definitely not the same.  It's kind of hard to describe, but if you like jam and apple butter, you will love this.  One batch of this wasn't actually enough to use all of the tiny apples, and I'm probably going to make it again later this week.
Apple Pie Jam
6 C chopped apples, with peels

1/2 T pumpkin pie spice (I used this recipe)
1 1/2 Tbsp lemon juice
1 C water
1 packet powdered pectin (I used Ball, this was 6 T from a larger canister)
3 C white sugar
2 C dark brown sugar
Place apples, spice, lemon juice, and water in a large pot and cook over medium until apples are tender.  Puree with immersion blender.  Stir in pectin and bring to a boil while stirring.  Stir in sugar.  Raise temperature to medium-high, or whatever temperature is needed to maintain a rolling boil.  When the jam is boiling hard enough that stirring doesn't make it stop boiling, set a timer to 1 minute and cook, stirring constantly.
When the minute is up, immediately remove the pot from the heat and continue to stir until it stops boiling.  Fill jars with hot jam.  Allow to cool, then put the lids on.  Refrigerate until chilled, then put any jars that you won't use right away in the freezer.  Refrigerated jam stays good for a week or two.  Just thaw jars as needed in the refrigerator for a day or two.
Yield: 5 or 6 pint jars
Posted by Cheese with Noodles at 1:58 PM No comments: 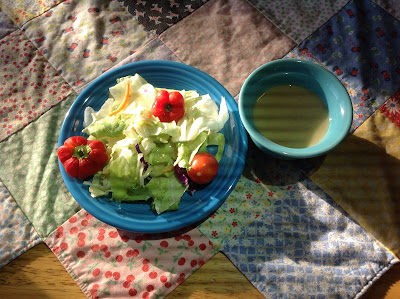 An InLinkz Link-up
Posted by Cheese with Noodles at 8:00 PM 13 comments: