My friend recently made these enchiladas and told me how good they were.  She found the recipe here, on Cookpad.  My husband loves creamy enchiladas and I decided to make them right away (with a couple of changes) because I happened to have all of the ingredients on hand except for the chicken and red enchilada sauce.  For the chicken, I just used a rotisserie chicken from the store.  They only cost $4 at Sam's Club and have quite a bit of meat on them.  About 1/3 of the meat went into the enchiladas and the rest will go into chicken soup I made from cooking the bones with water, garlic, and bay leaves in my Instant Pot.
As predicted, my husband loved these.  He adores anything sorta Mexican food-ish, and cream cheese, so I knew they'd be right up his alley.  He liked them so much that he requested that I make a new tag on my blog for 10/10 rated recipes.
Cream Cheese Chicken Enchiladas
4 C cooked, shredded chicken

This recipe is from the blog A Taste of Madness, but slightly tweaked.  It's a great to make if you have cottage cheese that needs to be used up, and is easily doubled.  Leftovers freeze nicely.  Convenience aside, these are good pancakes.  They aren't my default favorite (that honor goes to the basic pancake recipe from Cinnamon Roll Pancakes), but they are definitely tasty.  They're very light and creamy, which may sound odd for a pancake, but it definitely works. 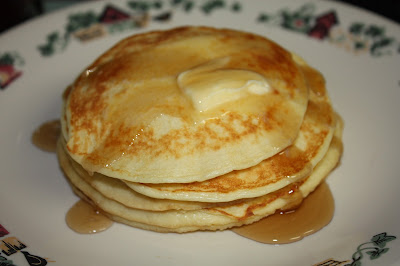 Cottage Cheese Pancakes
1 C cottage cheese
1/3 C flour
2 Tbsp canola oil
3 eggs
1/4 tsp salt
1/2 tsp vanilla extract
Place all ingredients in a medium bowl and mix with immersion blender until cottage cheese is pureed and everything is well combined.  Ladle batter onto a greased pan or griddle over medium heat and cook until bubbles form and the surface looks a little dry, then carefully flip and cook on the other side until golden.  Keep cooked pancakes warm on a plate in an oven set to 200.  Serve with syrup, fruit, or other toppings of your choice.
Yield: 2 servings
Posted by Cheese with Noodles at 12:45 PM 2 comments:

This is one of those embarrassing recipes.  Embarrassing both because of the ingredients, and because of how easy it is to make!  Regardless, my husband really likes it, and so do I.  It's nice and light and the graham crackers become cakey after sitting, but not in a gross soggy graham cracker way.  Admittedly, if you don't like pudding and Cool Whip, you probably won't like it, but it's definitely worth a try if you aren't above enjoying instant pudding mix!
I always make this with cheesecake pudding mix and dark chocolate frosting, but there's no reason you couldn't get a bit creative.  Chocolate pudding, chocolate graham crackers, and chocolate frosting?  Banana cream pudding, cinnamon graham crackers, and caramel frosting?  Why not!
Creamy Graham Cracker Refrigerator Cake
2 3.4 oz boxes instant pudding mix (I use Jell-o brand cheesecake pudding mix)

1 box graham crackers (you will need about 3 sleeves of crackers)
1 can dark chocolate frosting
Whisk together pudding mix and milk until it begins to set, then fold in the Cool Whip.
Line the bottom of a 9 by 13 baking dish with graham crackers, breaking them to fit if necessary.  Spread 1/2 of the pudding mixture on top.  Cover that with another layer of graham crackers, then the rest of the pudding mixture.  Cover with a third and final layer of graham crackers.
Remove lid and foil seal from frosting can and microwave until partly melted, about 45 seconds.  Stir until smooth.  Pour over dessert and spread to cover with a spatula.
Place dessert in refrigerator and let sit at least 8 hours so the graham crackers can soften.
Yield: 12 servings
Posted by Cheese with Noodles at 3:45 PM No comments:

This is a stew recipe I just made up a few days ago.  My husband and I were both very pleased with how it turned out.  He doesn't usually care for soups or stews, but to my surprise, he loved this one.  It's rather unlike any other stew I've had.  The carrots add a lot of sweetness, and that combined with the tomatoes and Worcestershire sauce give the entire stew a very BBQ-like flavor, even though there isn't any BBQ sauce in it.  Don't fear the plain, unseasoned meatballs.  I left them plain (other than the seasoned flour) to speed up the prep, but the stew has very vibrant flavor and the little meatballs are perfect in it.  They're very tender, too.  Like most stews, this one is better after a day or two in the fridge, so look forward to the leftovers!
Quick Note:  This recipe is for the Instant Pot, but it could be easily adapted for a normal pressure cooker.  If you don't have one of those, you can either cook it on the stove or use a slow cooker.  To cook it on the stove, proceed with browning the meatballs in a large skillet, but cook the onions in a large pot and add the remaining ingredients as described in the recipe, bring the stew to a boil, then reduce to a simmer and cook, covered, stirring occasionally, for about 40 minutes.  If you're using a slow cooker, cook the onions and garlic in a large skillet first, then brown the meatballs.  Place all the ingredients in your slow cooker as described in the recipe and cook on low for 6-8 hours, or until veggies and meatballs are cooked through. 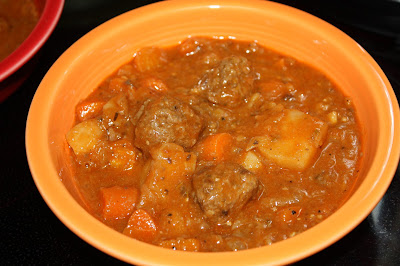 BBQ Meatball Stew
4 Tbsp flour
2 tsp montreal steak seasoning
1 lb ground beef
3 Tbsp bacon grease, divided (or olive oil if you don't have bacon grease)
1 large onion, chopped
3 cloves garlic, minced
2 C beef or chicken broth
2 T soy sauce
2 T Worcestershire sauce
1 tsp dried rosemary
1/2 tsp salt
1/2 tsp pepper
3/4 lb baby carrots, chopped
1 russet potato, chopped
15 oz can stewed or diced tomatoes, pureed with blender or immersion blender
In a cereal bowl, mix together the flour and steak seasoning.  Form the ground beef into 3/4 inch meatballs and roll them in the flour mixture, then set on a plate.  Melt half of the bacon grease in a large, nonstick skillet, then add the meatballs.  Dump any remaining flour mixture in with the meatballs.  Brown the meatballs on all sides (they will cook through completely later), then remove them to a plate.
Turn the Instant Pot to the saute function and add the remaining bacon grease.  Add chopped onion and cook, stirring frequently,  until it begins to turn translucent and brown slightly.  Add the garlic and cook for another minute or two.  Pour in the broth, soy sauce, Worcestershire sauce, rosemary, salt, and pepper, then add the carrots and potato.  Place the meatballs on top and gently push them down so they're submerged in liquid as much as possible.  Pour the blended tomatoes on top.
Seal Instant Pot and set the manual setting to 30 minutes.  When the time is up, do a quick release, then gently stir the stew and serve.
Yield: 6 main dish servings
Posted by Cheese with Noodles at 1:31 PM No comments:

For Secret Recipe Club this month, I was assigned the blog Lori's Culinary Creations.  The author, Lori, lives in Utah with her husband and their parrot, kitties, and dogs.  They like to ride around on their Harley in their spare time!  Lori sounds like a pretty interesting lady to me, and as a fellow animal lover, I'd like to meet her and her pets.
Lori's blog is packed with tastiness.  I was particularly drawn to Jalapeno Popper Burgers (which I did actually make already, yum), Seven Layer Salad (which I plan to make soon), and the one I made for this post, Creamy Muffin Tin Mac & Cheese Bites.  About time I finally make mac and cheese for Secret Recipe Club!  This was a complete impulse recipe for me because I happened to have all of the ingredients on hand.  I did have to use egg noodles instead of macaroni because it's all I had, I used milk instead of wine (personal preference), and baked the mac and cheese in mini muffin tins instead of normal sized ones.  They turned out really well.  My husband prefers his mac and cheese unbaked and had his straight from the pot, he really liked it and gave it a score of 9/10.  He is very picky about mac and cheese, so that's a great rating!  He did admit to liking the muffin bites as well.
I don't know that I'll go out of my way to make the bites just for us again, but I can definitely see myself making them for an appetizer to bring to someone's house (they're very good room temperature) or as a lunch for kids.  We will definitely have the base mac and cheese recipe again though because it was really good.  Thanks, Lori! 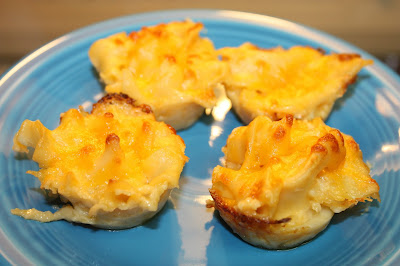 3 Tbsp butter
1 clove garlic, minced
4 Tbsp flour
2 1/2 C milk
1 Tbsp dijon mustard
salt and pepper to taste
4 oz grated swiss cheese
8 oz grated cheddar cheese
small amount extra cheddar for garnish
paprika, for garnish
Preheat oven to 425 and grease a 24 cup mini muffin tin.
Boil macaroni until al dente in a pot of salted water.  Drain and return to the pot.
Make the sauce while the macaroni cooks.  Melt butter in a sauce pan over medium-high and add garlic, cook until it just starts to turn golden.  Add flour and cook and stir for a minute, until flour is smooth.  Whisk in milk 1/4 C at a time  for the first cup and a half, making sure the sauce is smooth between additions, then add the rest.  Stir constantly until sauce comes to a simmer, then continue to simmer while stirring for a minute or two.  Remove from heat, whisk in mustard and salt, then stir in cheese until smooth.  Stir sauce unto cooked macaroni.  Spoon mac and cheese into greased mini muffin tin (you will have extra), sprinkle with a little extra cheddar and paprika, and bake at 425 until golden on top, about 12 minutes.  Remove muffin tin from oven and let them sit for 10 minutes or so before carefully removing them, blotting off any excess grease with paper towels, and serving.
Yield: 24 mac and cheese bites, plus a bowl or two extra to have for lunch!