This week's TWD recipe is for Buttermilk Crumb Muffins.  The recipe is courtesy of Marion Cunningham, a lady who published several well known baking books.  If you'd like to read the recipe, it's hosted over on the blog Easier Than Pie, and you can also watch Marion Cunningham and Julia Child make the recipe together here.  Usually I'm not a fan of cooking shows, but I do enjoy watching the video for Tuesdays with Dorie recipes!

Now, to business.  This was a pretty straight forward endeavor.  I followed the recipe exactly and even mixed up the flour and brown sugar with my fingers like Marion in the video.  Normally I don't like getting stuff on my hands but this was kind of fun!  In the video, they get exactly 12 big muffins by filling the tins almost all the way to the top.  I did the same and my batter loving husband ate what little batter remained, but really it would probably be just as well to make 16 or so muffins instead of 12. 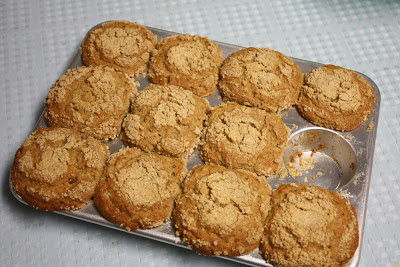 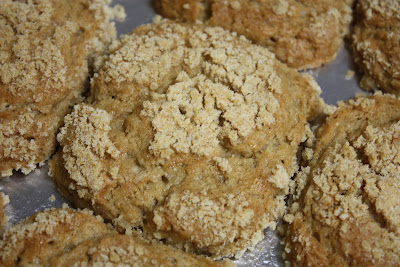 Not the prettiest things, but know what?  They sure were good!  They taste very homey and old fashioned.  The cinnamon and nutmeg are pretty mild and the brown sugar gives them a nice, full flavor.  Perhaps not the most exciting muffins ever, but they were FAR from boring.  They actually remind me quite a bit of the glorious Allspice Apple Crumb muffins, only without the apples, a slightly different flavor profile, a different type of crumb topping, and a lot less work.  Admittedly, they are not on the same level as Allspice Apple Crumb muffins, but I can be a bit particular about muffins and I thought these guys were really yummy anyway.  The only part I wasn't completely pleased with was the crumb topping.  It tasted pretty floury and there wasn't a whole lot of it (though next time I could just set aside more!) and it wasn't as crumbly as some, but it was still nice and I think scooping out part of the mixture before adding the rest of the ingredients is part of the charm.

Oh, and sorry there isn't a picture of them out of the pan.  For the love of muffins, use paper liners if you make this recipe!  They didn't stick per se, it's just that they're so soft and fluffy that you end up tearing the tops off the muffins when you try to get them out.  The original plan had been for me to send these to work with my husband, but I don't think his coworkers want to crowd around a muffin tin with spoons, so the muffins will be staying home with us.

Verdict:  A repeat muffin for sure!  Not an every day muffin what with all the shortening and sugar, but good for the occasional treat or to take along somewhere.
Posted by Cheese with Noodles at 2:44 AM