Tonight's dinner was originally going to be Chicken Cacciatore (a recipe that I'll share later if it turns out well), but right when I was about to put the ingredients in the slow cooker, I came upon some photos of a cheese stuffed burger called a Juicy Lucy.  The Juicy Lucy (or Jucy Lucy, if you prefer) is a cheese stuffed burger from Minneapolis.  Burgers aren't usually my favorite thing, but for whatever reason, a cheese stuffed one sounded perfect today!  When looking for a recipe, I decided to combine two of them:  the idea of adding bacon came from Cinnamon Spice and Everything Nice, the burger recipe itself came from this one on AllRecipes, and I used cheddar, lots of garlic, and served the burgers with avocado on top because I felt like it!

I'm happy to say that the burgers turned out awesome.  Sadly, all of mine did end up leaking cheese a bit (really seal those edges!), but the burgers don't seem to have suffered for it at all and the leaked cheese kind of cooked onto the bottom of the burgers.  My husband and I both agreed that this burger is better than just a bacon cheeseburger.  No issues with the bacon falling off the burger this way, and the cheddar was super melty and stretchy instead of just half melted on top..  The avocado was also a perfect, creamy addition.  Tomato and lettuce would have been nice on top, but the burgers were so thick already that they would have been impossible to eat!  Instead, we had a salad on the side. 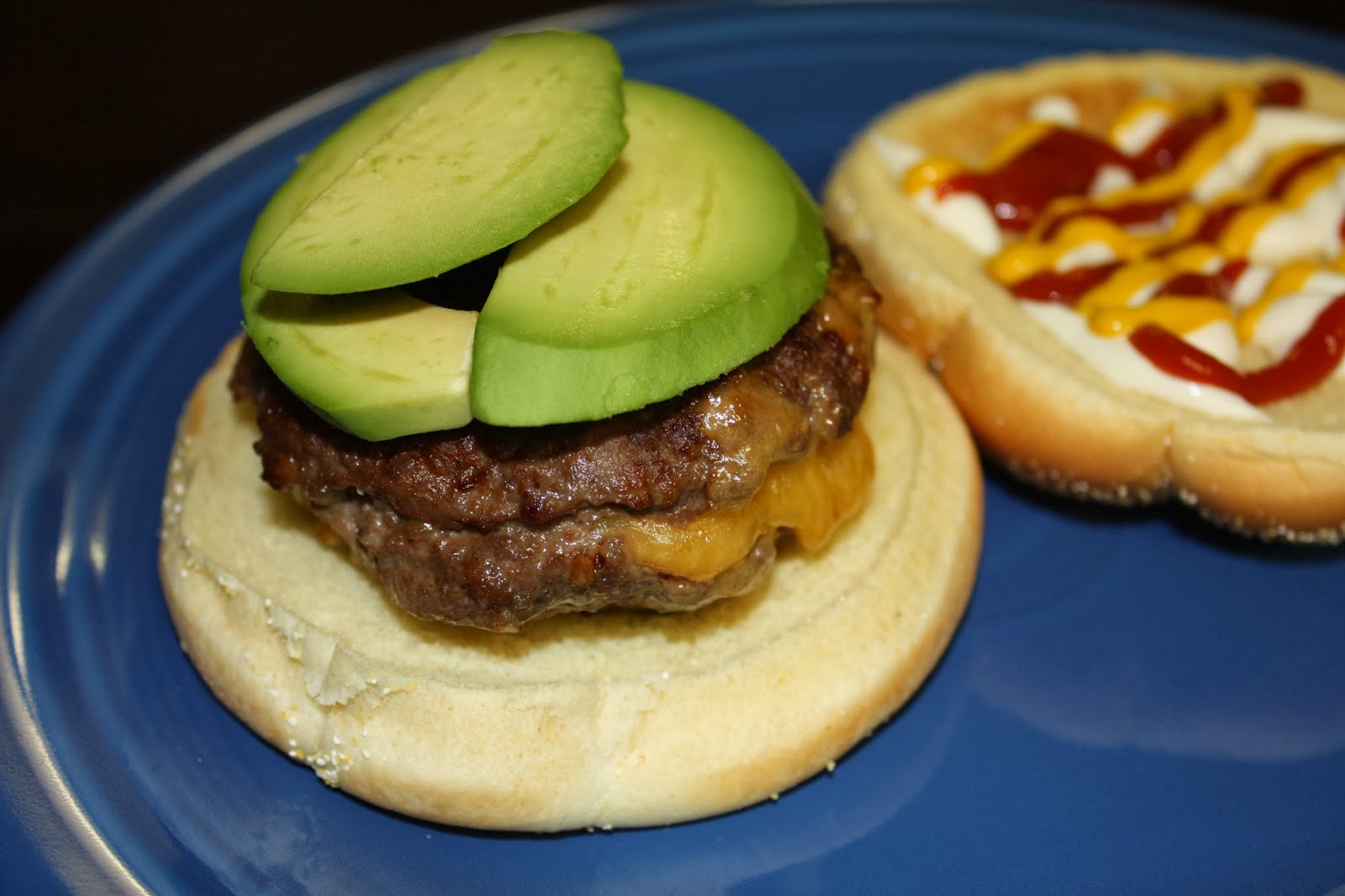 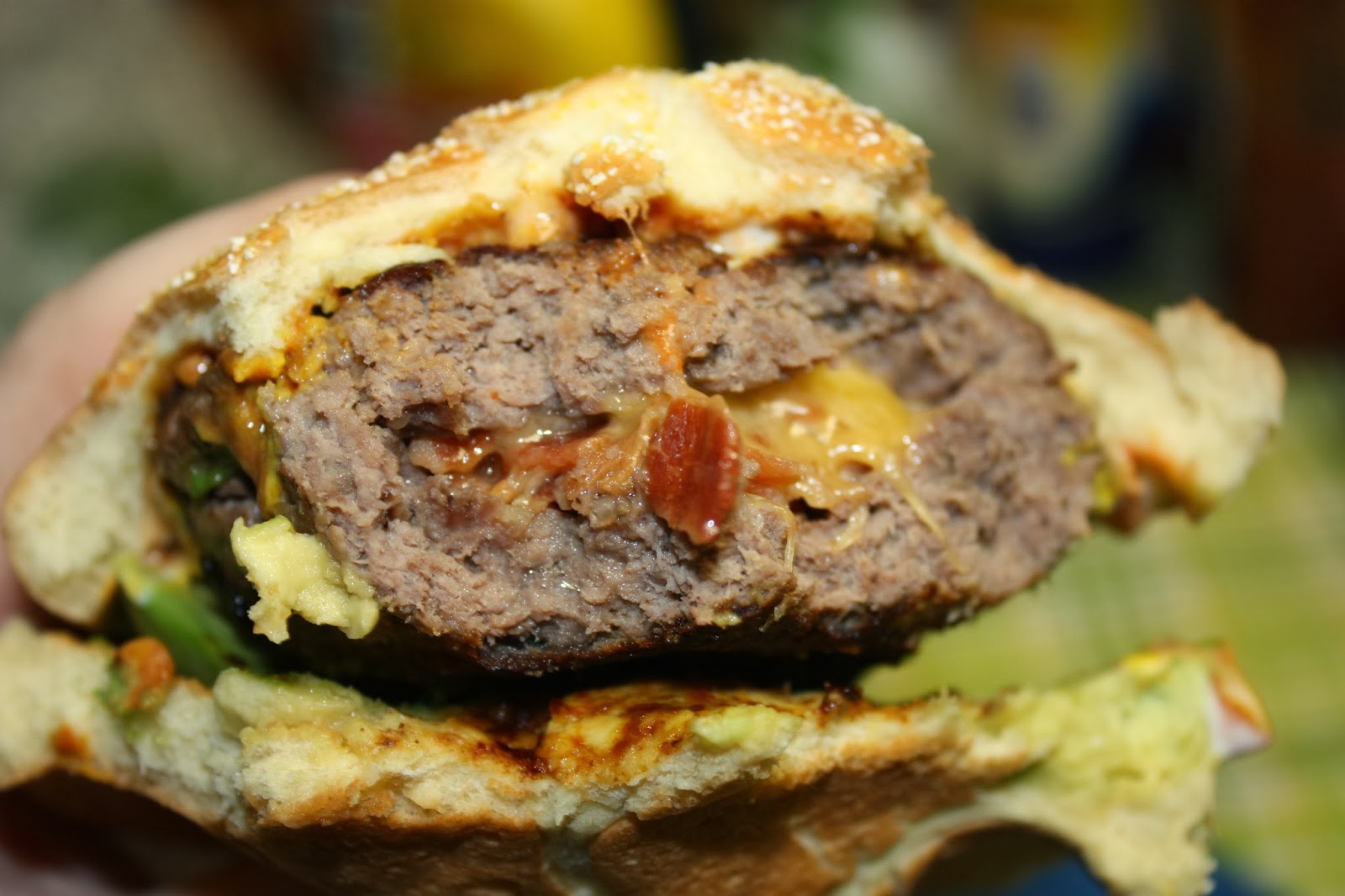 Sorry if the half gnawed burger looks unappealing, I wanted to show the inside but didn't want to cut my burger in half!

Fold each slice of cheese in half, then in half again so each slice ends up as a little stack of 4 small pieces.  Cook and crumble the bacon.

Mix together meat, onion, garlic powder, salt, and pepper, just until well combined.  Divide meat mixture into quarters, then form each quarter into 2 equal sized balls.  Working with one burger's worth of meat at a time, flatten the two balls into uniform patties, each about 5 inches in diameter.  Place a quarter of the crumbled bacon into the center, then top with one of the folded stacks of cheese.  Top with the other patty and firmly pinch together the edges of the two patties.  Repeat process with the rest of the meat.

Heat oil in a large nonstick skillet over medium high, and when the pan is hot, add the burgers.  Cook until browned on one side, then flip them over and poke the center in a few places with a toothpick.  This will help release steam inside the burger and help prevent the cheese from gushing out while the burgers cook.  Cook the burger on the second side until the internal temperature of one of the burgers is 160 degrees, then remove them to a paper towel lined plate.

Let the burgers sit for a few minutes before serving because the cheese inside is very hot.  Serve on toasted buns topped with avocado slices and whatever else you'd like.

Yield: 4 burgers
Posted by Cheese with Noodles at 10:23 PM