My blog assignment for this month's Secret Recipe Club was The Pajama Chef, which is written by a lady named Sarah.  This is kind of off topic, but have you ever met someone and felt like you've seen them before?  I swear, Sarah looks exactly like someone I know, but I can't think of who it is.  I even wondered if Sarah and I have met before at some point!

In any case, Sarah's blog has lots of yummy recipes.  So many that I actually made three recipes from her blog this month!  These chicken nuggets, which I made two or three weeks ago, but also her amazing Ginger Apricot Cranberry Sauce and her Mixed Vegetables Mornay.  I made the last two for Thanksgiving and am still enjoying the leftovers.

I decided to make Baked Honey Chicken Nuggets because the recipe looked so different, and different things intrigue me. My only changes here were to season the raw chicken with a bit of salt and pepper, and I turned on the broiler for a couple of minutes at the end of the baking time so the nuggets would brown a little.

These nuggets were really good!  The honey flavor was quite prominent (though far from overwhelming) and the crunch from the panko bread crumbs was delightful.  The dipping sauce is great, too, and would probably be very good with baked french fries served on the side.  I served mine with Green Beans Amandine (another SRC recipe!), which was yummy for sure, but fries just go with chicken nuggets, don't they?  I should probably add that long after the nuggets were gone (side note, they reheated fairly well), I still had leftover dipping sauce and kept looking for things to dip in it because it's so good.  It's like a creamy, mild honey mustard with a bit of BBQ flavor.

Next time I make this recipe, I'm going to try using mustard instead of the balsamic vinegar in the honey-vinegar mixture you dip the chicken into before baking.  We couldn't taste the balsamic vinegar at all (I think it mostly served to thin the honey a tad), but mustard would surely be noticeable.  I would also like to try cutting the chicken in half as described in the recipe, but then just cutting each half into 2 or 3 pieces instead of lots of small nuggets.  My husband ate his chicken with a fork anyway and this would be faster! 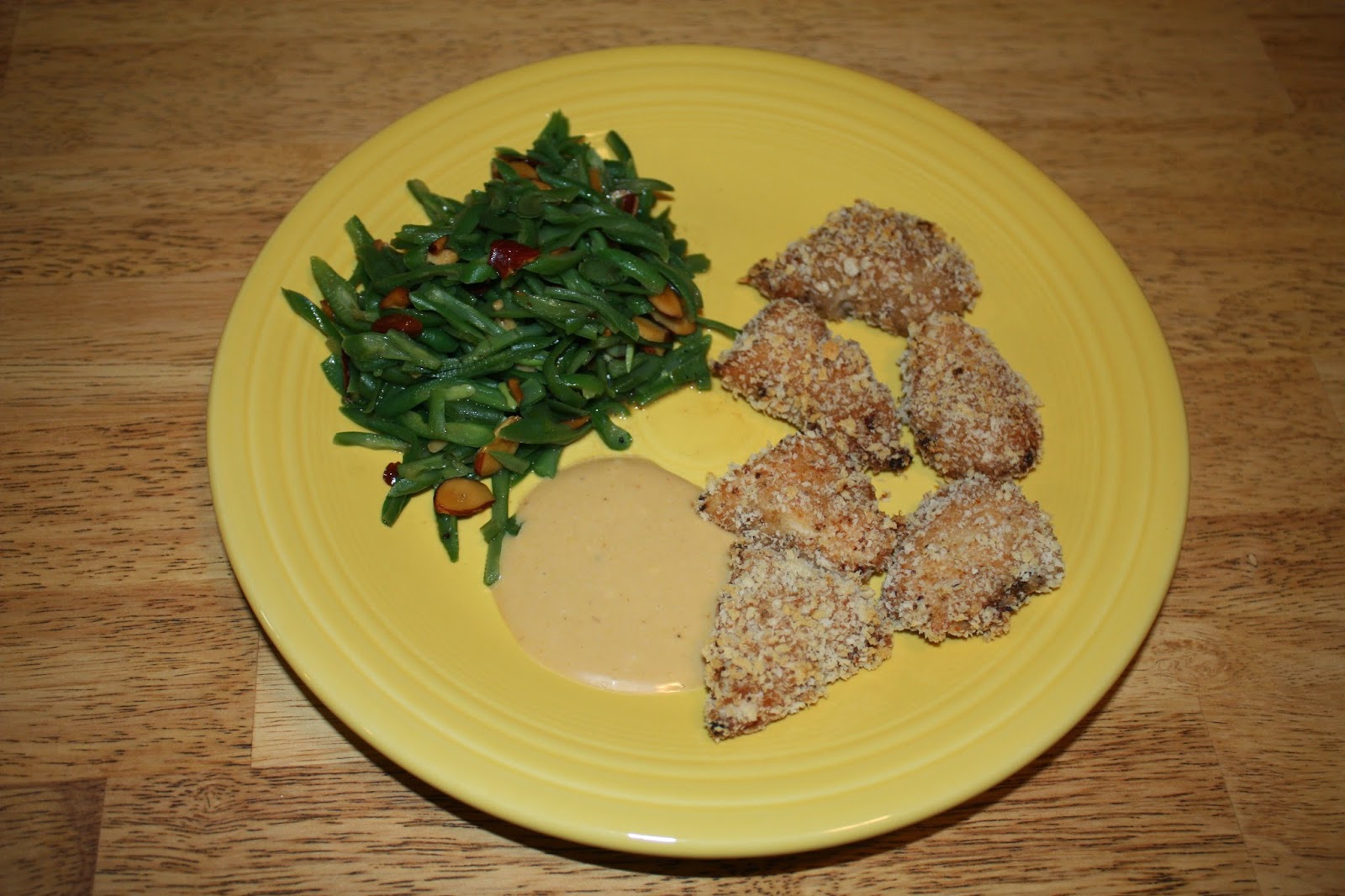 Stir together the sauce ingredients in a small bowl until smooth, cover, and refrigerate while you make the nuggets.  You could even make this the night before, it tastes best after it's had time to sit!
Preheat oven to 375 and line a large baking sheet with parchment paper.

Stir together the honey and balsamic vinegar in a cereal bowl.  Measure bread crumbs into another cereal bowl.

Cut the chicken into nuggets.  To do this, slice the breasts in half lengthwise so you have two thin halves, then cut them into 1 1/2 inch pieces. Sprinkle chicken pieces with salt and pepper to taste.

One or two pieces at a time, put the chicken into the honey mixture on both sides, and let any excess drip off.  Press both sides of the chicken pieces into the bread crumbs, gently shake off any excess, and arrange on the baking sheet.  Repeat until all nuggets are coated.

Bake chicken until cooked through, about 30 minutes.  If the crumb coating isn't toasted, turn the broiler on just long enough to make the bread crumbs light golden.  Make sure not to walk away because they could burn quickly!

An InLinkz Link-up
Posted by Cheese with Noodles at 10:17 PM