For this month's Secret Recipe Club, I was assigned the blog Sid's Sea Palm Cooking! Sid cooks up a variety of really interesting recipes, and hosts a tapas night every month. That sounds like an awesome idea and I wish I was organized enough (and social enough) to do that! Besides, who doesn't love tapas?

My recipe choice was Deviled Ham Spread. I picked it mostly because I've never had or made anything like it, and it isn't really something I'd usually make. This recipe club seemed like a good opportunity to make it! I also considered Light and Airy Biscuits for a Crowd, and Tijuana Tilly Cheese Enchiladas. In the end, I went with the ham spread because I could prepare it quickly and didn't have to actually heat anything up, which is great if you may be faced with frequent interruptions. Why am I facing interruptions? We got a puppy :D She's beautiful, sweet, and adorable, but she also has a teeny tiny bladder and requires a lot of my undivided attention and frequent spur of the moment trips outside! She's actually pitching a fit in her pen right now because Mama's paying attention to the computer instead of playing with her. I think I chose the right recipe!  Needless to say, very little cooking has been happening since we got her two weeks ago.

I did make two little changes to the recipe. First, I used mayo instead of sour cream because sour cream in large amounts upsets my husband's stomach and I knew he would end up having the ham spread on sandwiches for lunch during the week. I also used onion powder instead of shallots, but that's only because I remembered the shallots as we were driving out of the grocery store parking lot. Oops! No harm done, but I'd like to try the shallots next time.

Verdict? Yummy, and unlike anything either of us have had before! I'm glad I tried it. Next time I make it, I'll do the shallots instead of onion powder like the recipe says, and I may actually halve the amount of cream cheese so the ham is a bit more prominent. No complaints though, this is a solid recipe and makes a lot! 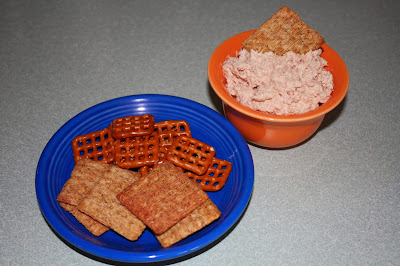 Place ham in the bowl of a food processor and process until fine.  Stir together all other ingredients in a medium mixing bowl, then stir in ham.  Add salt to taste.  Cover and refrigerate for a couple of hours, then serve with crackers, pretzels, veggies, or as a sandwich spread.