For this month's Secret Recipe Club, I was assigned Making Memories with your Kids.  The blog is written by Erin, who is a school counselor and mom of two super cute kids.  I'm very fond of Erin's blog and have been visiting it since I was first assigned it a couple of years ago and made Pop Tart Cookies.  Since then, I've made her Coconut Macaroons and Snickerdoodles, plus a couple others.  I actually made a recipe she made for a past SRC tonight for dinner, and made a casserole of hers last week, which I'll post about soon.  Erin's blog is very playful, for lack of a better term, and she makes all kinds of incredibly delicious looking and at times off the wall recipes that really appeal to my off the wall self.

So, my original plan was to make Slug Candy.  It's just too hilarious.  I will still make it sometime, but decided now wasn't ideal for a number of reasons too boring to go into.  My next plan was to post about the Chicken Broccoli Casserole I made last week, but my camera up and died on me.  Since I don't have a cell phone (weird, I know), I had no way to photograph it.  That meant I was forced (forced!) to make another recipe for Secret Recipe Club since the post had to have a picture.  Lucky for me, I managed to scrounge up a cell phone to photograph SRC Take 2, which is Oreo Brownie Trifle.  It's a terrible picture, but better than the MS Paint rendition I would have had to make if I didn't have the cell phone, so I'm happy.
I had my husband pick between this, Snickers Brownie Trifle, and Reese's Peanut Butter Cup S'mores.  He loves Oreos, so chose this trifle, surprising no one.  I'm definitely going to make those PB S'mores soon, though!  You really should take a stroll through the dessert section on Erin's blog, it's quite the treasure trove.
The trifle turned out well.  It's very sweet and a little goes a long way!  I did have to change the recipe a little, sorry, Erin.  My husband is lactose intolerant and can't have sweetened condensed milk, so I left that out and used lactose free milk instead.  I also sorta halved the recipe because the full batch would have been a LOT of trifle for two people.  The recipe is still essentially the same, though!  It's sure to please kids and Oreo lovers everywhere.  I will definitely make it again when I want something over the top and fun.
Quick Note:  You can use vanilla or cheesecake pudding mix if you can't find Oreo. 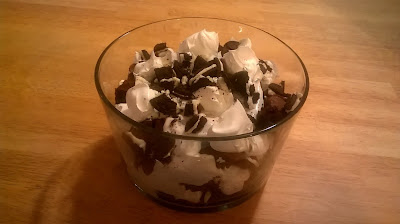 Oreo Brownie Trifle
1 box brownie mix that makes an 8 by 8 pan, plus ingredients on box
about 15 Oreos
4 serving size box of instant Oreo pudding mix
1 1/2 C milk
8 oz tub Cool Whip, divided
Prepare and bake brownies according to directions on box, set aside and cool completely.  Cut into small cubes.
Whisk together box of pudding mix and milk.  After it sets, fold in half of the Cool Whip.
Layer 1/3rd of the brownie cubes in a trifle dish.  Top with 1/3rd of the pudding mixture, then dollops of 1/3rd of the Cool Whip.  Sprinkle with 5 crushed Oreos.  Repeat layers twice more, starting with brownies and ending with Oreos.
Cover trifle and refrigerate for a few hours before serving.
Yield: 10 servings