For this month's Secret Recipe Club, I was assigned the blog Dancing Veggies.  Is that a cute name or what?  Dancing Veggies is written by a mom named Amanda who is a vegetarian and enjoys looking for and thinking up recipes that are delicious and not too hard on the wallet.

This was one of those months where I made my SRC recipe really quickly, within a couple days of receiving the assignment.  There were lots of tasty looking options on the blog, and I actually made the delicious Peach Dutch Baby, too, but decided I would share Summer Spaghetti because we loved it so much.  This is a very flavorful dish, but it's not super saucy.  It isn't spaghetti with marinara sauce, it's more like spaghetti in chopped up tomato heaven.  I used a combination of smallish on the vine tomatoes and yellow cherry tomatoes.

Thanks for the recipe, Amanda, my husband and I were crazy about it!

Quick Note:  The original recipe called for 1/4 C minced fresh basil.  The store didn't have any, so I purchased fresh oregano.  I used it and thought it was delicious, but will probably use dried in the future unless I happen to be growing some.  We didn't notice a big flavor difference between fresh and dried of this particular herb, and that little bundle of oregano cost like $3.  Fresh basil is a different story, though, and would definitely be good in this!


Also, to reheat the leftovers, I put the pasta in a large nonstick skillet with a little chicken broth (you could use veggie broth) and heated it over low until the pasta was tender again.  It was almost as good as the first night, which definitely would not have been the case had I heated it in the microwave!  We would have been eating a giant clump of noodles that way. 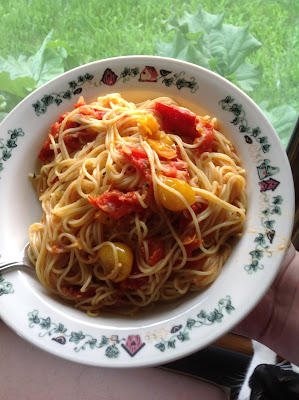 Melt butter in large skillet over medium-low heat.  Add onion and saute until completely softened, about 15 minutes.  It's okay if the onions turn a little brown, but that's not the goal.  Add the garlic and saute for another couple of minutes.  Add tomatoes, red pepper flakes, oregano (add later if you use fresh basil), and salt to taste.  Turn to medium and cook, stirring occasionally, for about 15 minutes.  You want the sauce to be at a gentle simmer.

Bring a large pot of water to a boil while the tomatoes simmer.  Add angel hair and cook until it's a little firmer than you want, then drain and add to the skillet with the sauce.  Cook and stir for a couple of minutes, until pasta is completely coated in sauce and tender.   Add the fresh basil if you're using it, and serve.


An InLinkz Link-up
Posted by Cheese with Noodles at 8:00 PM