I'm not a fan of bananas. The flavor and texture are just unpleasant. That doesn't stop me from occasionally buying a bunch to snack on at school- darn them for being so healthy and portable- but they're definitely not my favorite fruit. A week or so ago my husband bought a bunch to take to work in the mornings but as of today, there was one lonely looking brown banana sitting on our counter. Usually I would feed it to my bunnies because they love bananas (one once got into my bag and ate an entire banana, peel and all), but the other day I ran across the Banana Snack Cake recipe at at the Tried-and-True Cooking with Heidi blog right here.

Backstory: Shortly after I graduated from high school I babysat a pair of adorable two year old twins and their mom made the only banana bread I've ever enjoyed. I've held out hope all these years that I might find another recipe like hers (she just threw some ingredients together so couldn't tell me what exactly she did) so decided to give Heidi's Banana Snack Cake a whirl. The verdict? Delicious, with a light banana flavor! Who would have thought that vegan banana bread was the best? I wholeheartedly look forward to having this for breakfast the next few days.

Of course I had to change the recipe a tad. First I added a wee bit of salt, then 1/2 teaspoon butter flavoring because I had some in the pantry and thought it might be good. You could probably leave it out if you don't have any. The original recipe calls to top the cake with powdered sugar after baking, but I don't really like the flavor of powdered sugar and it's messy. There WAS however a measly 1/4 cup of brown sugar left in the bag and I felt morally obligated to add some cinnamon (I love cinnamon) so I just mixed them up and sprinkled them on top of the cake before baking. The brown sugar melted and ended up tasting like the bottom of a cinnamon roll! So much better than banana bread baked in a loaf pan because you get a much higher ratio of topping to cake :oD 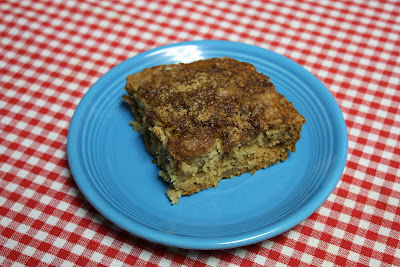 Grease an 8 by 8 pan and preheat the oven to 350. Stir together dry ingredients. Mash the banana with a fork in a small mixing bowl. Stir in water, oil and extracts. Add to dry ingredients and stir just until combined. Spread in prepared pan. Stir together remaining brown sugar and cinnamon, then sprinkle over batter. Bake 15 minutes, then cover with aluminum foil (shiny side up) to prevent the topping from burning. Bake about 10 more minutes or until a toothpick inserted into the center of the cake comes out clean. Note: The brown sugar topping will make the cake look uncooked so be sure to test it anyway! Serve warm or cooled.

Yield: 9 small squares
Posted by Cheese with Noodles at 10:41 PM