My second recipe from Tuesdays with Dorie turned out great! It's not a recipe I would have tried normally but I'm so glad I did because it was really unique and really yummy. This time I made Pizza Rustica, an Italian pie that is often served around Easter but can be served other times as an appetizer or light meal. It really isn't similar to pizza at all, if anything it's more like an Italian inspired cheese quiche, but isn't super eggy in flavor or texture. Really quite hard to describe- My husband kept saying, "I don't know what I'm eating!" when we were having dinner. If it had been served to me in a restaurant I would have had no idea what was in it, not even the ham because it was shaved thinly and then cut up really small. The crust is a bit sweet and also nice and sturdy, while the filling is savory and creamy.

I personally LOVED how the flavors and textures went together, but my husband was a little more reserved in his opinion and felt it was kind of bland (though he liked the leftovers better). That's okay! I can definitely see myself making it again for a very occasional treat, or making it as an appetizer. It would make a good brunch dish, too. It should be fun to mess around with the filling ingredients. I'm thinking sun dried tomatoes and kalamata olives, or green chiles and cheddar cheese instead of mozzarella (to appease the husband). 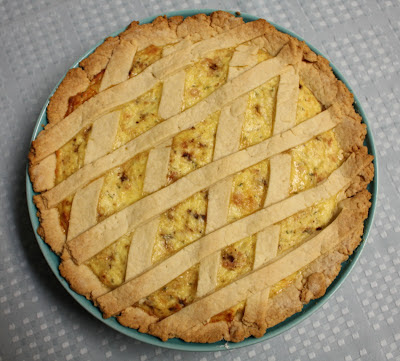 To see the recipe, check out Capital Region Dining. Someone also found this great video of Julia Child making it with Nick Malgieri. I watched it before making my pie and it helped. My only changes were to use shaved ham from the deli because prosciutto is so, so pricy, and parmesan instead of romano. Oh and my ricotta was the skim milk kind because that's all the store had. For ME, those are very minimal changes at least! My crust was a tiny bit hard to work with because the dough was dry and I added 2 teaspoons water but should have added another. Could have certainly been worse though and the finished product was most definitely worth it! I could even see using the crust to make apple pie. Yum! 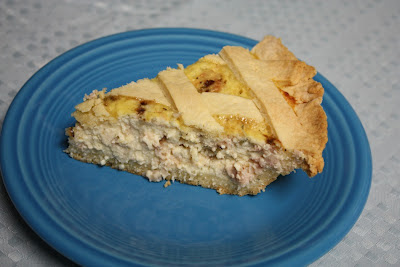 As you can see, the pie held it's shape very well. This was the first slice removed when the pie was still warm but not hot. You could easily pick it up and eat it with your hands like in the video, though we used forks. I should also note that the Pizza Rustica reheats well and is good cold, room temperature, and hot :)
Posted by Cheese with Noodles at 12:01 AM