For this month's Secret Recipe Club, I was assigned the blog My Hobbie Lobbie.  It's written by a lady named Claire who sounds pretty similar to me, because she loves baking, crafting (especially crochet), and traveling!  I get the feeling we would get along well.

Claire has lots of yummy looking recipes on her blog, and I chose one called Almond Apple Crisp.  I made it about 3 weeks ago on a rather chilly August day.  My husband loved it so much that I had one serving that night, and by the next afternoon, he had completely polished off the entire dish.  Now he does have a sweet tooth, but that's extreme, even for him!  He says I definitely have to make this recipe again.  My only changes would be to increase the amount of cornstarch from 1/2 tsp to 1 Tbsp because the filling was very, very runny, and I'd leave the salt out of the topping because it tasted salty to me.  I made those changes in my version of the recipe below.

Thank you, Claire!  I'm planning to make your Spicy Tuna Pasta here in the next couple of weeks. 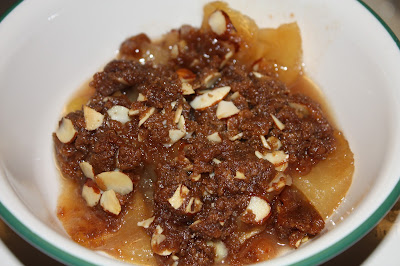 Preheat oven to 350 and grease a 2 quart baking dish.

In a large mixing bowl, stir together white sugar, cornstarch, and cinnamon, then add apples and lemon juice.  Stir until the apples are evenly coated.  Spoon the apples and any remaining sugar mixture into the prepared baking dish and set aside.

Now make the topping.  Stir together the flour, brown sugar, and cinnamon, then cut in the cold butter cubes (I did all of this in my stand mixer with the paddle attachment) until the mixture looks like wet sand.  Stir in almonds.  Sprinkle mixture evenly over the apples.

Bake the crisp until the apple slices in the center are tender (use a fork), which will take about 60-90 minutes (mine took 90).  You can cover the top of the crisp with aluminum foil, shiny side out, if the topping and almonds get too brown.