It's Secret Recipe Club time again!  This month, I was assigned the blog BCMom's Kitchen.  The blog is written by Anna.  Anna's approach to the recipes she makes seems pretty in line with my own.  She is a chronic recipe tweaker, loves trying out new recipes, only repeats a recipe if it turned out fabulously, and tends to gravitate towards easier recipes.  My kind of cook!

Tastiness abounds on Anna's blog.  She has a ton of recipes that appealed strongly to me, and I will probably make more of her recipes in the future.  I was particularly drawn to her varied selection of rhubarb recipes because to my undying joy, winter has finally left Interior Alaska (though last night I dreamed it snowed again) and my rhubarb plants are working overtime.  The stalks are still pretty small, but big enough to sacrifice a few for springtime tastiness!  Both of her rhubarb muffin recipes look great, as does the rhubarb focaccia (so unique, I'll definitely make this one!), rhubarb pudding cake, and blackberry rhubarb crumble.  Yum!  It was a very close tie between the two, but I decided to make rhubarb bread instead of rhubarb muffins.

The rhubarb bread turned out great.  I was drawn to it because I'd never actually seen a rhubarb bread recipe, and I liked that rhubarb was the star of the show instead of having to share the title with another fruit.  The soft, tart little bits of rhubarb were really nice and contrasted well with the sweet, cinnamony goodness of the bread.  One of the loaves went to our neighbors who kindly took care of our pets when we went out of town recently (first time leaving my dogs, it was so hard!), but my husband and I got to devour the other loaf ourselves.  Anna has a very intriguing recipe on the bread page for honey rhubarb butter, which I will try another time.  I just purchased a tub of honey brown sugar cinnamon butter at Sam's Club so wanted to use that on the bread.  Great combo!  I also really liked the taste and crunch of the topping, plus how quick and easy it is to make, so plan to use it in other recipes.  How good does pumpkin bread with crumb topping sound?  Yes, please! 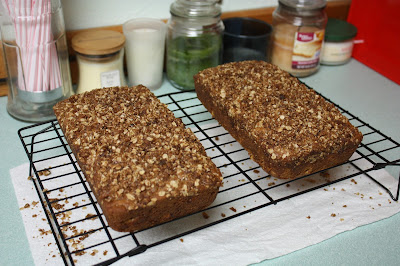 Mix together egg, brown sugar, and oil, then stir in the vanilla extract and buttermilk.  In another bowl, combine flour, salt, baking soda, and cinnamon.  Stir into wet ingredients, then stir in rhubarb.  Divide batter evenly among the two loaf pans.

To make the topping, stir brown sugar, oats, and cinnamon into the melted butter, then sprinkle evenly over the loaves.

Bake in the preheated oven about 45 minutes, or until a toothpick inserted into the center comes out clean.  Let loaves cool in the pans for 10 minutes, then turn them out onto a cooling rack to finish cooling.