For a teaching with technology class I'm in I had to create a survey for my classmates to fill out. Unsurprisingly, I picked desserts for my topic and promised to bring in the class's favorite dessert. The options were cookies, ice cream, cupcakes, pie and brownies. Then they were to pick their favorite type of each dessert (ex: peanut butter cookies, snickerdoodles, chocolate chip cookes, etc). Brownies ended up winning (I was the only one who picked cupcakes!) and fudge iced brownies were the preferred type of brownie, so that's what I brought in to class today!

To be honest, I just used a big box of brownie mix for the brownies. It's the one baked good that to me without fail tastes better from a box than homemade. I did make this delicious fudge icing myself though, from this recipe. It's perfect! Easy to make, delicious, soft but not runny, creamy, glossy, chocolaty... YUM! The recipe says it's for brownies and it was perfect on them, but I think it would also be great on a cake baked in a 9 by 13 pan. I don't suggest trying to use it for a layer cake though because it's really runny at first and you'd probably either end up with a big mess or icing that's set up too much to spread.

Quick Note: Boil the icing for exactly 30 seconds and start counting once the mixture has reached a rolling boil. If you start earlier it will be too soft. Also be sure to pour it over the brownies or cake right after you take it out of the oven because some reviewers complained about the icing separating from the brownies or cake otherwise.

Sorry about the ugly picture, there weren't a lot of brownie survivors left to photograph. They went over quite well with my class and several other students and the teacher brought in cookies when they heard I was bringing brownies. 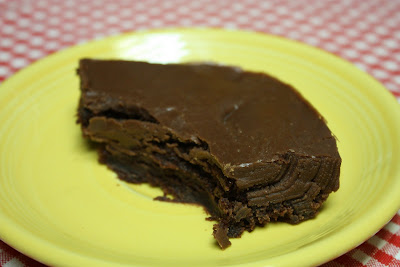 Combine sugar, butter and milk in a small sauce pan and heat over medium-high, stirring with a wooden spoon frequently at first and constantly once it starts to simmer. Once the mixture comes to a rolling boil, let it cook for exactly 30 seconds while you stir. Remove from the heat, let it cool until it stops boiling, then stir in the chocolate chips and vanilla extract until smooth. Pour over still piping hot 9 by 13 pan of brownies or cake and spread to cover. Let set for several hours before serving.

Yield: Depends on how big you like your brownies or cake!
Posted by Cheese with Noodles at 9:36 PM