Well, look at that, another recipe without pictures! I kind of meant to take pictures of all the recipes I post, but let's face it. The vast majority of my food photos are not particularly appetizing and I don't like always dragging out the camera just to photograph a plate. So I'll just post pictures if I think it's worth it.

Last weekend we went to a potluck of sorts. Everyone brought/made some kind of pasta dish and we made homemade pasta (I now have about 2 1/2 pounds of homemade fettuccine in my freezer, yes!). Our contribution was Cincinnati Chili. It's supposed to be served over spaghetti so it did fit the theme of the evening even though everyone else brought Italian sauces. Also I've wanted to try Cincinnati Chili for years because it sounds so intriguing. As a cinnamon freak, the cinnamon and other spices piqued my interest, and anything served over pasta with shredded cheese on top is worth trying! After looking into it more, I learned that Cincinnati Chili was created by Macedonian and Greek immigrants. My favorite cuisine is Greek/Lebanese/etc so it's not too surprising that a Greek spin on chili would be appealing! And I was definitely not disappointed. The Cincinnati Chili turned out amazing! The flavor was great, a little different, still recognizable as chili. The flavor was very rich and deep and just generally yummy. My husband was a tad uncertain the first night but he happily ate leftovers with me for a couple of nights after that.

This is the base recipe that I used. Now I realize that hard core Cincinnati Chili fans would probably be highly offended because I used ground turkey and beans in my chili (you're supposed to use ground beef and then top it with kidney beans at the end), but that's how we like chili and I see no reason not to make recipes in ways that will appeal to us the most. Feel free to make the recipe as described though with 2 pounds of ground beef instead. Another thing to note is that I read it's more authentic if you boil the meat instead of browning it in a skillet. Boiling it results in much smaller pieces of meat. To do this, fill a large pot with cold water, add the ground meat and break it up thoroughly with your hands, then boil it until cooked through. Drain and proceed with the recipe.

1.25 lb ground turkey
2 16 oz cans pinto beans, drained
2 1/2 C beef broth
16 oz can tomato sauce
1/4 C chili powder
1 1/2 t onion powder
1 t ground cinnamon
1 t ground cumin
1/2 t salt
1/4 t ground allspice
1/4 t ground cloves
1/4 t cayenne pepper
2 T cider vinegar
1/4 C chocolate chips
Brown ground turkey in a skillet. Alternatively, you can cook the meat by placing it in a large pot of cold water and using your hands to thoroughly break it up, then boil until cooked through. Place in a 4 quart slow cooker with remaining ingredients except chocolate chips and stir to combine. Cover and cook on high for 2-3 hours or low for 5-8 hours (the amount of time isn't all that important). Stir in chocolate shortly before serving. Serve over spaghetti topped as desired with shredded cheddar and diced onions.
Yield: about 8 servings
Posted by Cheese with Noodles at 10:22 PM 1 comment:

Tonight we went over to some friends' house for dinner and games. My friend made pasta dough and ravioli filling and we worked together to make ravioli while her boyfriend made a tomato sauce. My husband and I brought garlic bread and this broccoli and baked both in their oven. I'd never roasted broccoli before but it turned out very well! I was even snatching pieces of it when it was raw. It is definitely something we will make again. If you like broccoli and garlic you're bound to like this! Even with the amazing ravioli and garlic bread, the four of us polished off the entire pan (the broccoli shrinks some as it cooks). Sorry no picture, I didn't bring my camera.

Preheat oven to 350 and line a 9 by 13 pan with foil. In a gallon Ziploc bag, combine oil, garlic, salt and pepper. Add broccoli, seal bag, and toss around until broccoli is evenly coated. Arrange in baking dish and bake until lightly browned and crisp tender, 15 to 20 minutes depending on the size of your florets and how cooked you want them. Serve the broccoli with lemon wedges so everyone can squeeze on as much as they like.

Email ThisBlogThis!Share to TwitterShare to FacebookShare to Pinterest
Labels: side dish, vegan, veggies

When I was growing up, my dad was in the military and we moved from state to state pretty frequently. In all I went to 4 elementary schools because of the moves. My favorite for a number of reasons was a great school in Grapevine, Texas. A small part of why I liked the school so much MIGHT have been the school lunches! Most school lunch food is woefully bad but the food at that school was quite good. I'm pretty sure most of the food was made from scratch and the head cook (who was a very nice lady) put a lot of love into what was served. I remember they frequently made rolls from scratch and the entire building would smell like baking bread. On those days, kids that brought their lunch from home would trade away their food for the school rolls! As a picky kid who purchased lunch every day I very rarely disliked what was being served. If I didn't like what we were having, there was always the option of buying a baked potato or a huge salad instead.

These pears are one of the things that was served a couple of times a month. The lunch ladies even served the pears on lettuce leaves so they looked pretty! If you haven't had pears with whipped cream and mini chocolate chips, you should definitely try it. The combination of flavors and textures is very good and is actually the only way my husband will eat pears because usually he hates the texture. You can use peaches instead if you want and pineapple is nice too. 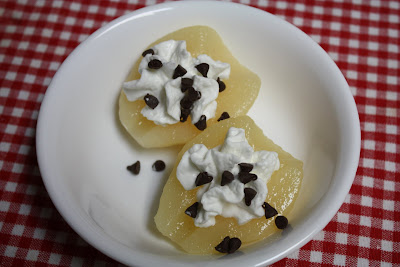 Place pear halves in bowls. Top each with a little whipped cream, then sprinkle on the mini chocolate chips!
Posted by Cheese with Noodles at 10:39 PM 1 comment:

Email ThisBlogThis!Share to TwitterShare to FacebookShare to Pinterest
Labels: dessert

This is a VERY versatile recipe! It tastes great on its own but you can also use it as a taco filling or even use it to make taco salad. The recipe makes a decent amount too so it's nice to have more than one way to enjoy the leftovers. From what I understand, this dish is popular in the Middle East made without the spices and cooked on the stove instead of in a slow cooker. I added the spices the first time I made it a few years ago because to us it needed a little something extra. It may be because of the kind of lentils I use. The store only has generic brown lentils and I think red and green lentils are more commonly used in food from the Middle East. I've had both red and green lentils before and they are indeed better in flavor and texture, but I have to work with what's available!

Sorry about the lack of a photo. You can click the link above if you want to see what it looks like!

Combine lentils, water, spices, and garlic in a 4 quart crock. Cook on high until lentils are tender, 2-4 hours (depends on your crock pot). Stir in the rice and salt, cover again, and let cook until rice is tender, 30 minutes to an hour. I suggest checking after 30 minutes and if it's still crunchy re-cover and don't lift the lid again for another 30 minutes.

When the lentils and rice are done, saute the onions in a small amount of oil over medium heat until they're browned, stirring frequently. This will take about 10 minutes. Top the lentils and rice with plain yogurt and the cooked onions.
Yield: 8 servings
Posted by Cheese with Noodles at 9:58 PM No comments:

Sorry about the lack of recipes over the past week! We had leftovers a few nights and one night I made a soup that needs to be tweaked more before I share the recipe. I also made a recipe that never got photographed! In a few moments I will post it anyway because it's good even if you can't see what it looks like. Then tonight I made these veggie fajitas. We love them! The fajitas themselves are great and I think meat lovers would appreciate them too. I've always liked fajitas and haven't ordered them from a restaurant since I made up this "recipe" because it's so easy to make and we think they taste as good as restaurant fajitas, which are always inexplicably expensive.

I know the recipe sounds plain because it's just sauteed veggies with salt and pepper, but they're really good. In the past I've tried adding spices and stuff to fajitas but they always ended up tasting like tacos that way! You can add a lot of additional flavor with condiments, and my favorite is chimichurri. From what I've read, it's Argentinean and usually made as a marinade for meat, but it's fantastic on fajitas too :) The chimichurri recipe is the result of my experimentation so I can't really say whether or not it's authentic. No picture of it unfortunately because we had salsa in the fridge to use up instead but chimichurri is great and VERY green :D

Note: You could add shrimp or a little bit of steak or chicken cut in strips if you want. If you do shrimp or steak you could probably toss it in with the squash. Chicken would be best cooked first and then removed from the skillet and added again at the end because of course you want to make sure it gets cooked through completely.
Chimichurri
1 bunch cilantro, stems torn off and discarded
4 T olive oil
3 T white wine vinegar
2 T lime juice
1/4 t salt
1/8 t cayenne pepper

Place everything in the bowl of a food processor or blend and puree until well combined. Serve over fajitas. 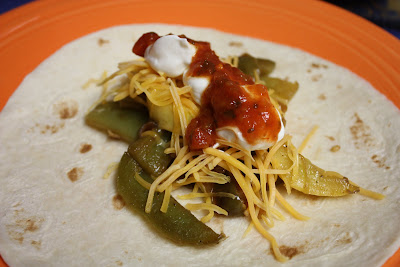 Heat olive oil in a large skillet over medium high heat. Add onions and bell peppers and cook about 5 minutes, stirring frequently, until veggies have nice saute marks and start to soften. Add mushrooms and cook about 5 minutes more, then add squash and cook about 3 minutes. Add garlic and saute another minute, then add tomatoes. Cook them just long enough to heat through and blister the skin. You don't want them to break up. Season veggies with salt and pepper. Place skillet on the middle of the table with flour tortillas and condiments on the side so everyone can put whatever they want on their fajitas.

Yield: About 8 fajitas
Posted by Cheese with Noodles at 9:30 PM 1 comment: