This recipe from Crockin' Girls is very simple, but very good.  Pork loin chops are very lean (other than the fat on the edge) and are often tough when cooked, but for some reason these ones were tender enough to cut with a fork.  The flavor was great, too.  It has a little bit of a tex mex flair to it because of the chiles in the Ro-Tel.  I served it with garlic mashed potatoes and kale salad with a sweet dressing and it was a really nice dinner.
Slow Cooker Ranch Pork Chops
9 thick pork loin chops (I cut the fat off)

2 Tbsp butter
1 clove garlic, minced
Montreal steak seasoning to taste
1 oz packet dry ranch dressing mix
2 10 oz cans Ro-Tel tomatoes (diced tomatoes with green chiles), undrained
Melt butter in a large skillet and add garlic.  Add pork chops and sprinkle one side with Montreal steak seasoning.  Brown chops on both sides, then arrange them in a slow cooker.  Sprinkle ranch dressing mix on top, then pour on tomatoes.  Cover and cook until meat is cooked through, about 4 hours on low.
Yield: 9 servings
Posted by Cheese with Noodles at 12:56 PM No comments:

This recipe really surprised me by how good it is!  I was just looking for a quick, easy, no fuss mac and cheese to serve along with Easter dinner, and came upon this one on Recipes That Crock.  Cream of mushroom soup in mac and cheese, how odd, but I decided to give it a go because you'll never know if you don't try.  Wonder of wonders, it turned out really well.  My husband ranked it in his top 3 mac and cheese favorites and I thought it was really good, too.  This is a great choice if you're cooking a bunch of things and need a side dish that can tend to itself for a while, or if you're headed to a potluck and need something that will stay nice and hot and tasty.
Quick Note: You can puree the cream of mushroom soup with a food processor or immersion blended if you (or the people you're serving it to) won't like the little bits of mushroom in the finished mac and cheese.  Also, use freshly grated cheddar for this because the coating on purchased grated cheese may prevent it from melting into the sauce nicely. 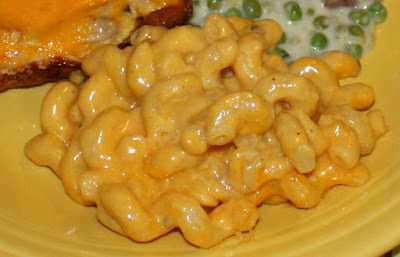 Slow Cooker Mac & Cheese
12 oz macaroni (cavatappi is pictured because the store was out of macaroni)
10.25 oz can cream of mushroom soup
1/2 C milk
2 tsp yellow mustard
1/2 tsp seasoned salt (or more to taste)
1/4 tsp black pepper
12-16 oz freshly grated cheddar cheese, divided
Cook macaroni in salted water until partly softened, but still underdone.  Drain and return to pot.  Add cream of mushroom soup, milk, seasoned salt, and pepper, then stir in 2 1/2 to 3 1/2 C grated cheddar (I used 3).  Taste and add more salt if needed.  Grease the crock of a small slow cooker and add mac and cheese.
Cover and cook on low for about 4 hours, or high for about an hour and a half- exact amount of time will depend on your slow cooker.  You can stir halfway through to make sure it cooks evenly, but don't stir after that or the mac and cheese won't have a baked consistency to it.
Remove lid, sprinkle with an extra 1/2 to 1 C grated cheddar, and continue to cook until cheese has melted.
Yield: 10 side dish servings
Posted by Cheese with Noodles at 1:09 PM No comments:

This is probably the recipe on my blog that I feel the most sentimental about.  My husband and I found it in a free booklet of Smucker's recipes at the grocery store in the summer of 2006, when we'd just been dating for a couple of months.  Seeing as we're both peanut butter lovers and had basically been eating our way through all of the peanut butter pies offered as dessert at the restaurants around town, we scurried home from the store with the ingredients for the pie and made it that night.  A favorite was born.  We started a little tradition of making peanut butter pie together every year on our dating anniversary, in addition to once or twice randomly throughout the rest of the year.  My husband even proposed to me on our dating anniversary in 2009 while we were eating this pie.  It's definitely a special recipe to us, and I don't really have an explanation for why I haven't posted it until now!

As much as I enjoy trying different versions of the same recipe (I have multiple favorite recipes for mac and cheese, spaghetti sauce, baked ziti, chocolate cake, etc), this is the one and only peanut butter pie recipe I've ever made.  The reason isn't actually really sentimentality (not entirely, at least), it's just that this pie is incredible and can't really be improved upon, so I haven't tried!  I found the recipe in a Smucker's booklet, but it online it can be found here on the Jif website, where it's called Decadent Peanut Butter Pie.  I have changed a couple of small things, namely that we like to divide the fudge into two layers and I use less Cool Whip because I've never seen a 12 oz tub of it at the store.  I also streamline the process a bit (no waiting for it to chill in the refrigerator between layers) and make my own cookie crust.
Quick Note:  If you don't have a food processor, you can crush the cookies in a gallon Ziploc bag with a rolling pin and just mix up the filling in a mixing bowl with a spoon.
Peanut Butter Pie
25 Oreo cookies
5 Tbsp butter, melted
8 oz brick cream cheese, softened
1/2 C sugar
1 C peanut butter, plus 2 Tbsp more for garnish
11 oz jar hot fudge topping for ice cream
8 oz tub Cool Whip, thawed
Place Oreo cookies in the bowl of a food processor and process until they turn into crumbs.  Pour in melted butter and pulse until well combined.  Dump cookie crumbs into a pie plate and press evenly along the bottom and up the sides.  Set aside.
Wipe out food processor.  Add cream cheese, sugar, and peanut butter, and pulse until combined.  Scrape down sides with a spatula, and pulse again until mixture is smooth.  Remove cutting blade.  Add 2/3 of the container of Cool Whip to the food processor and fold into the peanut butter mixture with a spatula until well combined.  Set aside.
Heat jar of hot fudge in jar according to directions on the label, then pour half of the jar into the pie crust.  Spread over the bottom of the pie crust with a spoon.  Set the rest of the hot fudge aside.  Spread pie filling evenly into the crust.  Top with the remaining hot fudge, reserving 2 tablespoons.  Spread to cover the filling evenly.  Spread remaining Cool Whip over the hot fudge.
To make the garnish, spoon the remaining 2 tablespoons hot fudge into a small Ziploc bag and the remaining 2 tablespoons peanut butter into another small Ziploc bag.  Cut the tip off one of the corners of the bag with the fudge and pipe it randomly over the pie.  Microwave the bag with the peanut butter for about 10 seconds (just so the peanut butter melts), then do the same as with the bag of hot fudge.
Place pie in refrigerator and chill until filling is set, about 4 hours.  Enjoy!
Yield:  About 8 servings.
Posted by Cheese with Noodles at 1:06 PM No comments:

This is a simple but delicious recipe.  Good for a small crowd if you want to make something easy, or good to make ahead to reheat later.  I most recently made these for my brother and his wife to keep in the freezer for a quick meal after the birth of my nephew.  The original recipe is from Southern Plate.
Pizza Subs
1 1/2 lbs ground beef
7 oz package pepperoni, cut in half and separated
14 oz jar pizza sauce
small can sliced olives, drained
1/2 tsp salt, or to taste
1/2 tsp dried oregano
1/4 tsp garlic powder
1/4 tsp onion powder
1/4 tsp black pepper
2 C grated mozzarella
8 sub rolls
Brown ground beef, drain.  Stir in all remaining ingredients except cheese and rolls and heat through.  Divide meat mixture evenly among sub rolls and top with grated cheese.
To serve immediately, preheat oven to 350 and place as many subs as you want to cook on a cookie sheet, then bake until the bread is toasty and the cheese is melted, about 10-15 minutes.
To serve later, wrap the subs tightly in aluminum foil and either refrigerate or freeze.  To heat, bake the foil wrapped sub in a 350 degree oven until heated through (about 20 minutes), making sure to thaw the sub overnight in the refrigerator if it was frozen.  If you don't have access to an oven (like if you take it to work for lunch), you can heat the unwrapped sub in the microwave until hot.  It will still be good, but not as nice as if it was heated in the oven.
Yield: 8 subs
Posted by Cheese with Noodles at 10:52 AM No comments: