I know it may not sound like a good thing for frosting to be chewy, but trust me on this.  It's not chewy like gummi bears, but chewy like a homemade caramel candy, with a solid helping of chocolate.  It starts out the perfect glossy spreading consistency, then firms up into a thick, fudgy texture.  How could that not be good?  Let me note that I have no idea how well this would work with a layer cake where the frosting has to stick to the sides, but it works well on cupcakes or spread over a 9 by 13 inch cake left in the pan.

This frosting is also astonishingly easy to make and only has two ingredients: chocolate chips and sweetened condensed milk.  It's the fudge frosting from Joanne Fluke's titular fudge cupcake recipe.  I was excited about trying the cupcake recipe for months because I've had a lot of luck with her recipes and love all things raspberry (the "secret" ingredient in the cupcake batter is raspberry syrup), but didn't care for the cupcakes themselves.  They weren't very chocolatey, but were both dense and dry.  Sorry, Joanne.  The frosting, on the other hand: divine!  Make it!

Pour sweetened condensed milk into a medium sauce pan and heat over medium, stirring frequently, just until it's hot and bubbly.  Remove from heat and wait for the bubbles to subside a little (about 30 seconds), then dump in the chocolate chips.  Stir mixture until chocolate chips are melted and the frosting is thick, glossy, and very smooth.  Spread immediately over cake or brownies.

Posted by Cheese with Noodles at 9:26 PM No comments:

This is just my regular banana bread with diced nectarines added, but it sure is good, and worthy of its own post!  Wow!  It's so moist, dense (in a good way), and sweet that it's practically cake.  One large loaf has 3 bananas and 3 nectarines in it, so it's full of fruit.  The nice thing is that you can taste both the nectarines and the bananas well.  Banana tends to cover up all other flavors, but because the nectarines are diced and not pureed, they come through great.  In the future, I'd like to try adding fresh raspberries instead of the nectarines and see how that turns out.

Preheat oven to 350and grease a one large bread pan (I use this one) or two normal sized ones.

Mix butter and sugar until fluffy, then mix in eggs and bananas.  Add baking soda, salt, and half of the flour to the mixing bowl and beat to combine.  Stir in 1/2 of the buttermilk, then stir in the rest of the flour.  Stir in the last of the buttermilk until everything is well combined.  Stir in diced nectarines.  Spread batter in prepared bread pan and bake until a toothpick inserted into the center comes out clean, about 1 hour for a large loaf, or around 40-50 minutes for two normal loaves.  You can cover the pan with foil if the bread browns too much.  Let baked bread rest for about 20 minutes, then invert it onto a plate to finish cooling.

Yield: About 12 servings
Posted by Cheese with Noodles at 1:08 PM No comments:

I love fresh fruit, and few things are better than a big bowl of fresh pineapple, strawberries, raspberries, mangoes, and kiwis all chopped up and tossed together.  So why does fruit salad made with canned fruit, pudding mix, and Cool Whip still so good?  I have no idea, but it is.  I've been making this recipe a couple of times a year for a long time now (with a special version at Christmas), so I think it deserves to be on my blog.  It may be low brow, but I kind of am too, so there you go.
You can use whatever flavor instant pudding mix you like.  Pistachio is the norm, and that's what I use at Christmas, but the rest of the time, I always use cheesecake pudding mix.  Also, the exact amount of fruit you use is up to you.  This time I used only two cans in addition to the pineapple (pears and peaches), but I often use 4 or so cans, and like for at least a couple of those to be a tropical fruit mix with mango, papaya, and pineapple.  Sometimes I also add grapes or bananas, but bananas only if it will be eaten quickly.
Junk Food Fruit Salad
20 oz can crushed pineapple, with juice
3 oz box instant cheesecake pudding mix
2-4 additional cans of fruit, drained and cut into bite sized pieces if necessary
optional: 1 1/2 C mini marshmallows
8 oz tub Cool Whip, thawed
Drain pineapple juice from can into large mixing bowl.  Add pudding mix and stir until well combined and smooth.  Stir in crushed pineapple, then remaining fruit and mini marshmallows.  Fold in Cool Whip until evenly mixed.  Refrigerate for a couple of hours before serving.  This keeps well in the refrigerator for 4 days or so.
Yield: 8 to 12 servings
Posted by Cheese with Noodles at 1:09 PM No comments:

For this month's Secret Recipe Club, I was assigned the blog Mother Would Know, which is written by a wonderful woman named Laura.  Laura is the mother to two grown children, but is ready and willing to be the fill-in mom for anyone who needs cooking advice!  Her blog has great recipes, lots and lots of tips, and is incredibly welcoming.  I really enjoyed poking around on the blog.

There were plenty of very appealing recipes to pick from.  I strongly considered Overnight Holiday Dinner Buns, Moist Almond Bread, and Tuna Stuffed Tomatoes, and will probably make all three very soon.  The recipe I ended up choosing was Chocolate Apricot Marshmallow Crunch: Rice Krispie treats topped with mini marshmallows and diced up dried apricots.  Why have I never thought of putting apricots on Rice Krispie Treats?  The combo just sounded amazing, and I was already looking for a dessert recipe to try, so the choice was simple.
How did they turn out?  Every bit as good as I hoped!  My husband and I were happy I made a double batch.  I'm also grateful for the trick I learned from Laura- use parchment paper to press down the cereal mixture and the topping!  It won't stick and works much better than a spoon or hands.  Why didn't I think of that before?  The funniest part is that a few hours before I made these treats, my own mom called and in the course of the conversation, she mentioned that parchment paper was awesome for pressing sticky Rice Krispie Treats into the pan.  So, thank you to both Mother Would Know and my actual mother!
My tiny changes were to not soak the apricots in juice because the chewy texture of the plain apricots appealed to me, and I added vanilla extract, because why not?  Regardless, what a fun and slightly different dessert choice for any time of year, but especially autumn/Halloween because of the colors.  I actually chose them in part because of the colors.  We live in Alaska and I love it here, but the end of summer is always sad and a tiny bit panic inducing as we gear up for another 6+ months of nonstop snow and cold.  I make a real effort to to try to get excited about autumn: wintry foods, Halloween movies, fall decorations, etc.  These Rice Krispie Treats fit in perfectly.  Thank you, Laura, both for the great recipe and for helping ease the transition into fall! 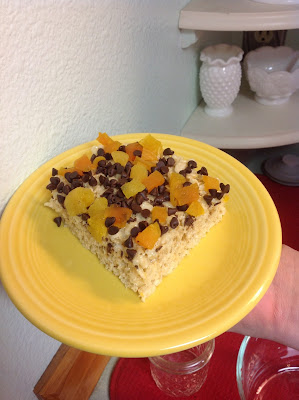 Chocolate Apricot Marshmallow Crunch
1/2 C finely diced dried apricots
1/3 C mini chocolate chips
3 Tbsp butter
8 oz mini marshmallows (by weight)
1/2 tsp vanilla extract
5 C Rice Krispies cereal
Cut two long strips of parchment paper to fit the inside of an 8 by 8 baking dish with a few inches of overhang on each end.  Overlap the strips so they make a + sign in the dish.  Set aside.
Melt butter in a large pot over medium-low heat, then add marshmallows and cook, stirring constantly, just until marshmallows are melted.  Immediately remove the pot from the heat and stir in the vanilla extract, then the cereal.
Once the cereal is completely coated, dump it into the prepared baking dish and press it in evenly with the back of a spoon.  You can use the parchment paper ends to press the mixture down, too.  Sprinkle the apricot pieces and mini chocolate chips evenly over the cereal mixture.  Use the long ends of parchment paper to firmly press the topping down.
Let set for a couple of hours until cutting into pieces to serve- you can use the parchment paper overhang to lift the Rice Krispie Treats out of the dish and then cut them into serving pieces.


An InLinkz Link-up
Posted by Cheese with Noodles at 8:00 PM 9 comments:

On at least one weekend day every week, I make my husband and I a nice breakfast.  More often than not that means pancakes, but I also like making beggagels, waffles, french toast, muffins, omelets, or occasionally a breakfast casserole or something like this.  I found this recipe on a website called Spoon University earlier this week and thought it sounded perfect for a weekend treat.  They're really good and turned out pretty much how I expected them to: Soft, warm, nice smoky crunch from the bacon, cheesy, and just all around yummy.  We had them with fresh plums, and it was a very yummy breakfast that I'll make again.  Conveniently, I only had to buy the biscuit dough because I pretty much always have the other ingredients in my refrigerator already.
It occurred to me while we were eating these that there's no reason why they couldn't be served as a side to go with chicken or something at dinner.  I think I just saw bacon and thought of breakfast.  They'll probably stay mostly a breakfast thing for us because they're a bit more caloric and involved than I prefer side dishes to be, but that's just me.  I'll probably make them to go with dinner at some point.  The leftovers will be going with my husband to work for lunch and I'm going to try freezing a couple of them.
Pardon the lack of photo.  My camera went to heaven and I don't have a cell phone, so no easy way to take pictures when I made this recipe!
Quick Note:  You really have to use the flaky layer biscuits for this, not the plain kind, because the layers make it so you can separate them into halves cleanly.  Make sure the tube of biscuits says "flaky layers" on it.  Also, I just added a sprinkle of dried chives instead of fresh green onions because my green onions were looking floppy and unappealing.
Cheesy Bacon Ranch Breakfast Biscuits
tube of 8 refrigerated jumbo sized flaky layer biscuits (they must be the flaky layer variety!)
ranch dressing
8 slices of bacon, cooked and crumbled
about 1 C grated cheddar cheese
about 3 Tbsp sliced green onions or 1 1/2 Tbsp sliced fresh chives
Preheat oven to 350 (or temperature indicated on package of biscuits) and cover a baking sheet with parchment paper.  Place biscuits an inch or so apart on baking sheet.  Bake until the biscuits just begin to turn golden on top, about 8 minutes.
Remove baking sheet from oven and gently pull the top half off each one.  Spread a little ranch dressing on each bottom half, sprinkle with 1/8th of the bacon, a generous sprinkle of shredded cheese, and some green onions or chives.  Replace tops, and sprinkle with a little more cheese.
Bake until nicely golden brown on top, about 5 minutes more.  Remove baking sheet from oven and let biscuits cool for a couple of minutes before serving.
Yield: 8 biscuits
Posted by Cheese with Noodles at 1:06 PM No comments: