Similar to my experience with pancakes, I have tried many, many waffle recipes. Most of them were fine but not quite right. This recipe from AllRecipes is the best I've tried, but the addition of a little ground cinnamon is what makes them amazing! We're cinnamon junkies and the waffles don't taste excessively cinnamon-y to us, it just adds a hint of something wonderful that puts them over the top. So if you love waffles and have been looking for the right recipe, I suggest you give this one a try! 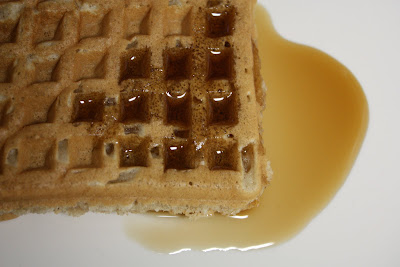 Preheat waffle iron. In a medium mixing bowl, stir together dry ingredients. Melt butter in a small mixing bowl in the microwave, then stir in milk, butter, and vanilla extract. Stir into dry ingredients just until combined, it's okay if there are some little lumps. Spoon batter onto greased waffle iron (the amount of course will depend on your iron, but mine takes 1 C batter) and cook to desired crispness. Keep waffles hot in an oven set to warm while you make the rest.

Yield: About 4 large waffles (enough for 4-6 servings)
Posted by Cheese with Noodles at 10:57 AM No comments:

I made these sandwiches for dinner last night and we just loved them! With only 3 ingredients in the meat, it's also one of the easiest things you could possibly make. If you know you like peperoncini peppers and beef, you will probably really like this one. If you don't know, I suggest you buy a jar and taste a pepper before making the recipe because it does have a strong peperoncini/vinegar flavor. Lucky for us, we both love peperoncinis, so the sandwiches are right up our alley. They are a little spicy- probably too much so for kids or those with delicate taste buds- but not too much for me and I'm fairly wimpy when it comes to heat. We shared a big bowl of cold green grapes while we ate and they helped keep things manageable.

Quick note: The original recipe called for a beef chuck roast but I came home from the store with a beef eye of round roast, which is very lean. The meat was fairly tough after cooking, but after I shredded it and let it cook in the juices, it turned out just perfect.
Peperoncini Beef Sandwiches

3 lb beef chuck roast or eye of round roast
5 cloves garlic, minced (I used the stuff in the jar because I had it!)
16 oz jar of sliced peperoncinis
sub rolls
sliced provolone or mozzarella

Place roast in a 4 quart slow cooker and top with garlic. Pour peperoncinis, juice and all, over top. Cover and cook on low until meat is tender, 6 to 8 hours. Remove meat, shred, and stir into liquid in slow cooker. Turn heat to high and cook, uncovered, about 1 hour so the meat has a chance to soak up the liquid and some of the excess juice can cook off. Top sub rolls with meat and cheese, then broil to melt the cheese.

Yield: 8 to 12 sandwiches
Posted by Cheese with Noodles at 10:33 AM No comments:

This is based on a recipe from AllRecipes that I first made a few years ago. It needed some tweaks (namely, it was too salty, the beef broth tasted odd, it didn't have enough sauce and I thought it needed onions), but now it's ready to share! This is a super easy recipe and of course it tastes good, too. The flavor is surprisingly rich and complex considering how easy it is to make and how few ingredients there are. We like it served with rice to soak up the sauce, but mashed potatoes would be good, too. Also I should note you can use bouillon cubes instead of broth (which is what I do), just crumble them into the skillet with the pork chops, onions and water and stir until dissolved, then proceed with the recipe.

Melt 2 T butter in a large skillet over medium-high heat. Add the onion slices and cook, stirring occasionally, until onions are lightly browned. Remove onions to a plate and remove the skillet from the heat. Combine salt, sage and pepper and rub into both sides of the pork chops. Melt remaining tablespoon of butter in skillet over medium-high and brown meat on both sides. Add onions back into skillet along with chicken broth. Reduce heat to low, cover skillet, and cook about 15 minutes or until pork chops are cooked through (amount of time will of course depend on the thickness of the meat). When pork chops are done, remove them to a plate. Stir together cornstarch and cold water, bring the liquid in the skillet to a boil, and whisk in the cornstarch slurry. Cook, stirring constantly, until sauce thickens. Cook one more minute. Add pork chops back to skillet. Serve over rice.

Yield: 6 servings
Posted by Cheese with Noodles at 12:50 AM 3 comments:

Look at that, another hummus post! I decided this one was worth posting too because some people can't find tahini or won't buy it because of the price. Sometimes I can get it at the grocery store but about 3/4 of the time, there's none to be found. If the health food store has it, it's about $15 for a jar and I just can't bring myself to spend that much on a jar of sesame seed paste. That's when I turn to this recipe, which I also made up! It's pretty similar to the other recipe except it uses canned garbanzos (for the sake of convenience) and it has more olive oil (for flavor and fat that the tahini would add) and more coriander (for flavor- I love coriander). So if you don't have tahini, I suggest you give this recipe a go. It will still be yummy. 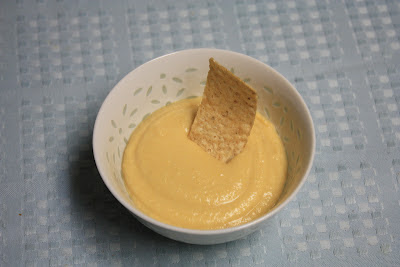 Combine everything in the bowl of a food processor or heavy duty blender.

Yield: about 4 cups
Posted by Cheese with Noodles at 6:31 PM 6 comments:

I've never really cared for garbanzo beans and wasn't expecting much when I first tried hummus about 8 years ago, but I was hooked after the first bite! And my husband hadn't tried it until he met me and we bought a container, but he was won over immediately, too. Unfortunately, it's very expensive at the store. Good news though! It's super easy to make if you have a food processor or heavy duty blender and much, much cheaper. My food processor is basically a hummus machine because that's what it's used for 90% of the time. Here's a recipe that I made up and have fine tuned over the past few years. We think it's perfect! You can also add a small jar of oil packed artichoke hearts and replace the olive oil with oil from the artichokes.

Place garbanzo beans in a slow cooker with 6 cups of water and cook until tender, about 4 hours on high or 8 on low. Or just cook them in a pot on the stove. When the beans are tender, drain them and reserve 1/2 C of the cooking liquid. Place the beans, reserved cooking liquid, and remaining ingredients in a food processor or heavy duty blender and blend until smooth. Serve warm or chilled with pita bread, tortilla chips, or raw veggies or make a sandwich with pita bread, hummus, tomatoes, cucumber, red onion and olives.

Note: The hummus will thicken after being in the fridge. If you want it thinner, you can stir in more olive oil or even water.

Yield: About 4 cups
Posted by Cheese with Noodles at 3:53 AM 1 comment:

This recipe is a slight variation of one my mom made when I was growing up. See, I even alter my mother's recipes! The original used steak instead of tofu, had 2 more packages of noodles, no garlic, and no added seasoning. It was good and I loved it as a kid to the point that my mom once made a double batch for me to share with my classmates when I did a presentation about Japan. All the kids gobbled it up, too! Instead of the tofu you can use steak cut into small strips or diced chicken or even diced shrimp. You can also change it up by using a 16 oz bag of frozen stir fry veggies if you'd prefer. The recipe is very flexible! It's far from gourmet (what could be with ramen noodles as a main ingredient?) but it's inexpensive, easy and good. Enjoy!

Bring water to a boil in a large pot. Break noodles into thirds lengthwise while still in the packages, then add them to the water along with the seasoning packets. Cook until noodles are soft and remove pot from heat. Do not drain.

While noodles are cooking, heat 2 T sesame oil in a large nonstick skillet over medium-high heat and saute tofu for about 10 minutes, stirring occasionally, until lightly golden. Remove tofu to a bowl and add another T sesame oil to the skillet. Add green onions and garlic and saute for a minute or so, then stir in bag of shredded cabbage and carrots. Saute until softened, about 5 minutes. Add to pot of cooked noodles along with sugar, sauces and pepper. Stir well to combine, then gently stir in tofu.

Yield: about 6 to 8 servings
Posted by Cheese with Noodles at 10:35 PM No comments: