Wow, my first post of the year and it's already March!  I've cooked this year for sure, but haven't experimented with new recipes as often as usual or written new posts.  My husband and I both started new jobs in December and January and adjusting to that has been taking up a lot of... well, everything.  Little bloggie has not been forgotten, just taken a backseat for a little bit.
So, this is a Fantastical Food Fight post.  I tried to participate in January, which had the focus of slow cooker soup.  Picked a recipe, bought the ingredients, then didn't actually make the recipe until late February.  It's funny, really, I ended up using all the originally purchased ingredients for other things and had to repurchase them when I actually made the soup!  The good thing about FFF though is that there's no obligation to participate every month, so I wasn't letting anyone down when I didn't participate.
This month's Fantastical Food Fight subject is peanut butter and jelly!  Yum, we love PBJs at our house.  I immediately thought of Ina Garten's amazing PBJ bars, but I've already made those and posted about them on the blog.  As much as I'd love an excuse to make that recipe again, the Fantastic Food Fight posts are supposed to be about new recipes.  Looking online, I found a couple of recipes and ideas I was interested in trying, but settled on a smoothie because we've been on a real smoothie kick since we got a Vitamix blender.
Okay so there isn't actually any jelly in this smoothie.  I try to make my smoothies as healthy as possible and although I like jelly, I a) did not want to add sugar to the smoothie, and b) I wanted to use fresh fruit.  But strawberry jam is frequently used in PBJs and peanut butter banana sandwiches are pretty common, too!
This is actually round two of my PBJ smoothie experiment.  The first time I tried it, I used milk instead of yogurt and water, real peanut butter, two bananas, and about half the strawberries.  Neither of us were crazy about the result.  I didn't like how rich (from the fat in the peanut butter) and milky it was, and the banana totally obliterated the strawberry flavor.  Usually I use two bananas in a smoothie for two people, but that wasn't a good choice for this one.  This version uses peanut butter powder so it's not as rich, yogurt and water, just one banana, and more strawberries.  The banana was actually added after I had already blended everything up.  My plan had been to leave out the banana entirely, but it was lacking a little something without the banana, so I chucked one in. 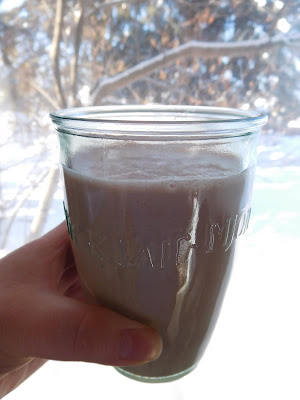 It's actually a lovely shade of pale pink- the glass is light green!
So, how did it turn out?  Pretty good!  My husband and I both agree that we like green smoothies better, but this was good and a nice alternative if you happen to be out of kale or spinach or are low on yogurt but want protein in the smoothie.  The flavors of the peanut butter, banana, and strawberries all come through nicely.  One thing I'd like to add is to make sure all your ingredients are cold.  The yogurt and strawberries came right out of the refrigerator, and I used cold water, but the banana was room temperature and the resulting smoothie was not very cold.  Usually I don't mind room temperature smoothies, but this one was definitely at its best when cold.
PBJ Smoothie
1/2 C plain greek yogurt

1/4 C cold water
1 frozen or cold banana
2 C frozen or cold strawberries
3 to 4 Tbsp peanut butter powder (I used 3 but 4 would have been good)
Place all ingredients in blender, put on lid, and blend until smooth.
Yield: 2 medium sized smoothies


An InLinkz Link-up
Posted by Cheese with Noodles at 6:30 PM 6 comments: