It's time for another Ina Friday!  Unfortunately I missed last month because I was sick and in no condition to cook, but it's a new month!  This time we were supposed to make a main dish.  I had about 5 main dish Ina recipes bookmarked as potentials, and after spending all day today thinking about her Weeknight Bolognese, I picked up the ingredients on the way home from work and whipped it up.

This recipe did not disappoint!  I did have to make a few small changes, the most important being that I only used 1/2 teaspoon salt instead of a tablespoon, and only 1/4 teaspoon black pepper instead of 1 1/2 teaspoons.  I think this was a VERY good call because with that amount of salt, we probably would have shriveled up and died.  Reducing the pepper was more an issue of personal taste, but I really think the given amount would have been excessive.  I also left out the olive oil simply because even lean ground beef has enough fat to cook fine, and used pre-shredded parmesan.  Normally for a recipe like this, I would have grated my own, but I had an open container in the fridge that I couldn't bear to throw away!  It definitely would have been better with freshly grated though, the pre-shredded kind detracted a bit from the dish because it made it a little chalky.  One last thing- I boiled a whole 1 pound box of shells even though the recipe called for 3/4 and thought my husband would just eat the leftover pasta with butter for lunch.  The recipe ended up making so much sauce, though, that I went ahead and mixed all of the pasta with it.  Even with the extra noodles, it was still wonderfully saucy.

Now, plenty of sauce aside, what did we think of this recipe?  Well, my husband LOVED it and rated it 10 out of 10!  I didn't like it nearly as much as he did, but it's still something I will make again and am quite pleased with how it turned out.  The sauce is very robust and hearty with great flavor from the wine and a bit of creaminess.  It does not taste like a sauce that was only simmered for 20 minutes!  Next time I may experiment with adding a bit more cream, mostly because there was a lot left over in the container and there's no way an extra 1/4 cup cream could make it worse. 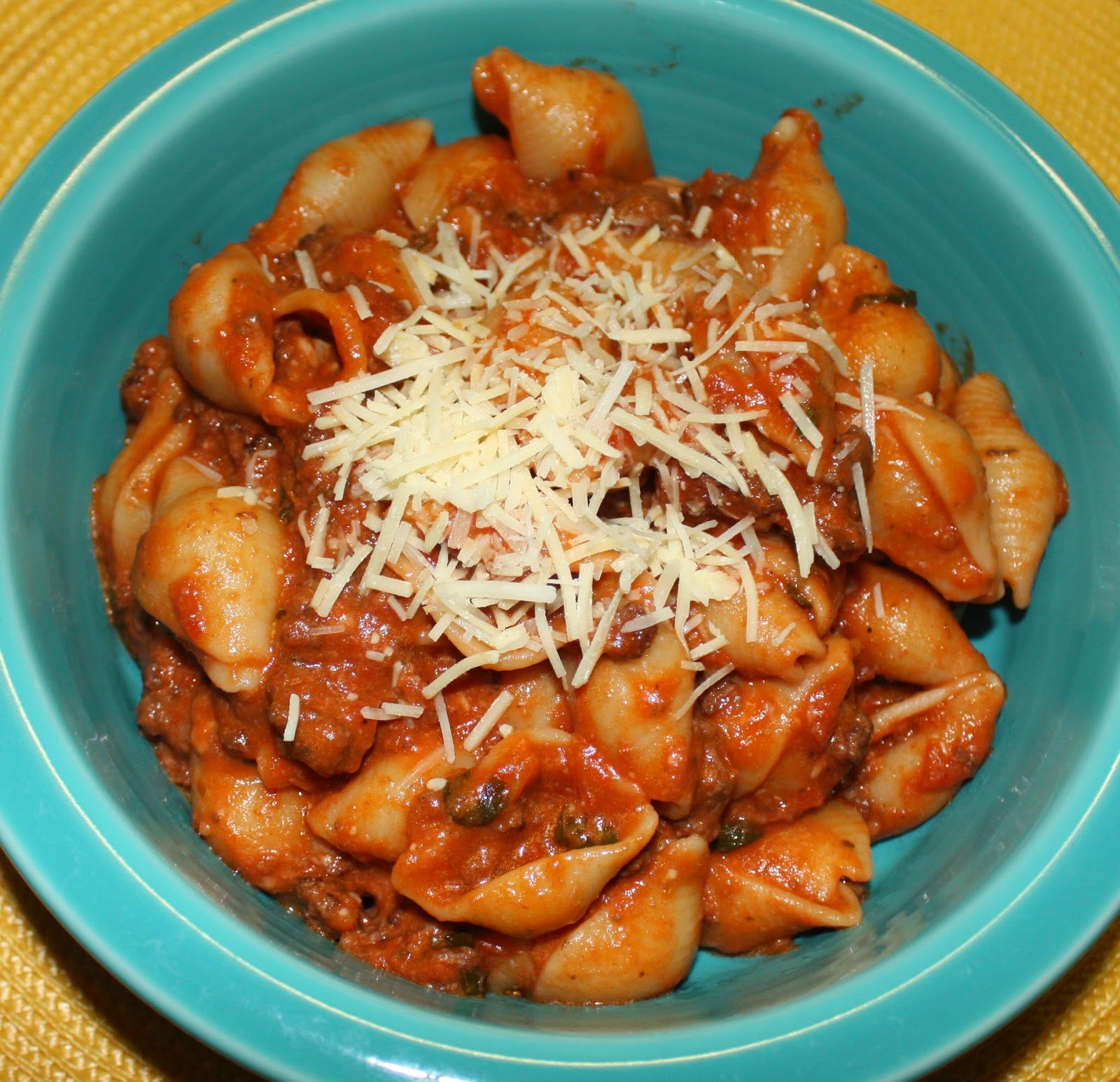 Heat a large nonstick skillet over medium high and add ground beef.  Saute until cooked through.  Add garlic, red pepper flakes, and oregano and saute another minute, until garlic starts to turn golden.  Add 1 cup of the wine and scrape up any browned bits from the bottom of the pan.  Add crushed tomatoes, tomato paste, salt, and pepper.  Bring sauce to a boil, then cover with a splatter screen, reduce heat to low, and simmer for 10 minutes, stirring occasionally.

After the 10 minutes are up, begin to cook the pasta in a large pot of boiling water.  While the pasta cooks, stir basil, cream, and nutmeg into sauce and continue to simmer, stirring occasionally, until pasta is done.

Drain pasta and place into a large serving bowl.  Pour sauce on top and add the parmesan.  Toss until pasta is coated and cheese is melted.  Serve in bowls topped with additional parmesan.

Yield: 5 generous servings
Posted by Cheese with Noodles at 12:00 AM 1 comment:

For this month's Secret Recipe Club, I was assigned the amazing blog of a nice lady named Sawsan who lives in Jordan.  Her blog is called Chef in Disguise and has so many incredible looking recipes!  I had a heck of a time choosing one because food from that region of the world is basically my favorite.  When I saw her recipe for chicken shawarma, I decided to go full out and make that along with her pita bread and toum (creamy garlic sauce) recipes.  This was my first time making any of these things and also the first time I'd had chicken shawarma or toum.

For the purposes of this post, I'm just focusing on the chicken shawarma recipe, but you can find her pita bread here and toum here.  I made the latter two exactly according to her recipes and they turned out great!  The bread was soft and tender, and formed pockets like it was supposed to (something I worried about a bit!), and the toum was extremely creamy, lemony, and garlicky.  They definitely get my recommendation.

The chicken shawarma was very good, too.  It's something I've always wanted to try and ended up being quite unique!  I've never tasted anything with this specific combination of ingredients, but cinnamon, allspice, and cardamom are among my favorite spices and this recipe has all three!  Sadly I did not have the mastic so had to do without, but I will definitely try to get some next time I'm in Seattle and will make this recipe again with it.  The flavors came together quite nicely even without the mastic, though, and my husband and I both are looking forward to the leftovers and making it again another time.  I'm so glad I was assigned Sawsan's blog because these three specific recipes are probably not ones I would have come across otherwise.

Below is my version of Sawsan's recipe.  There were a couple of things I was a little unclear about in the main recipe, so I did it how I thought she intended, but I followed her recipe pretty closely. 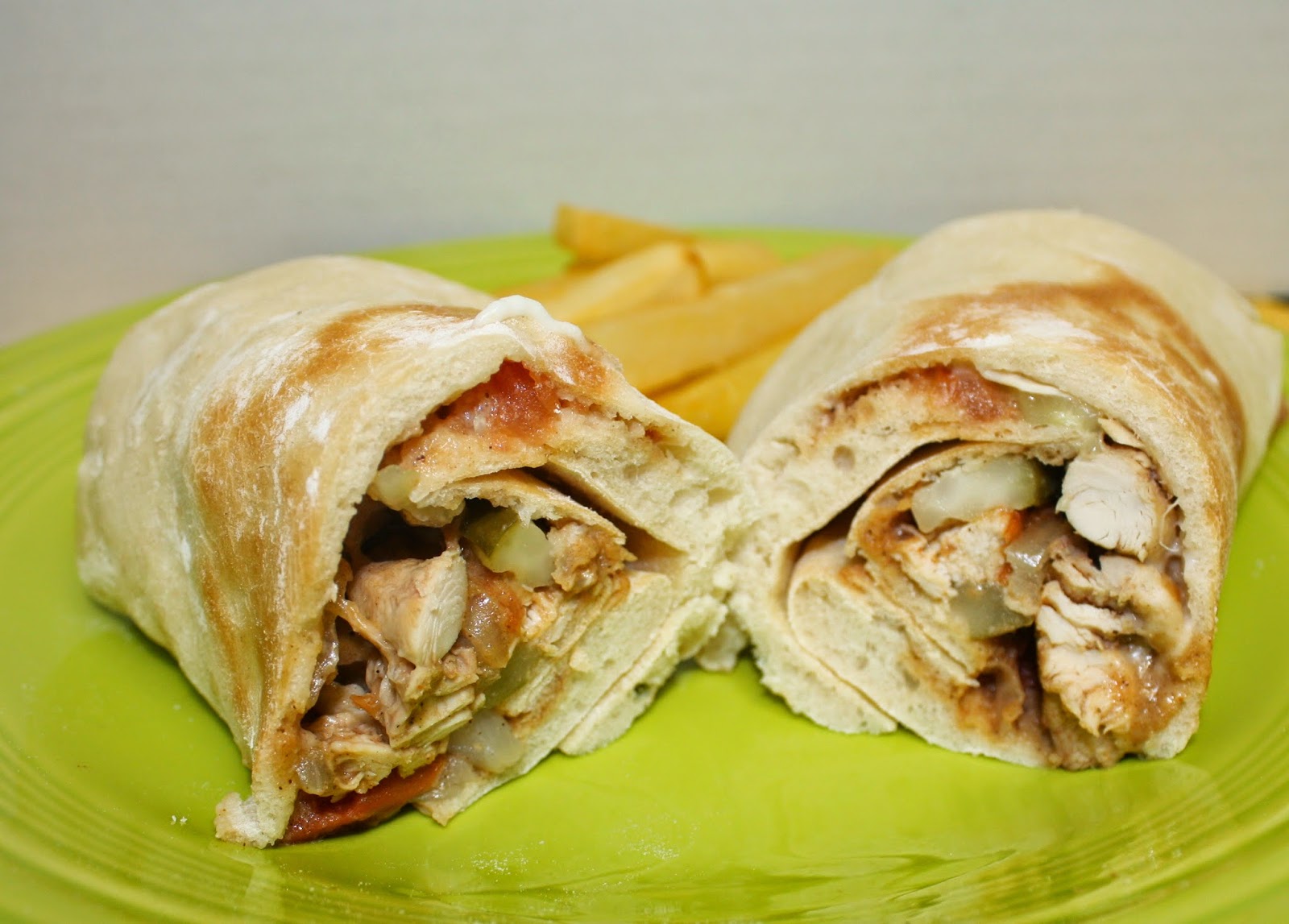 Mix together marinade ingredients.  Add chicken and stir to coat.  Refrigerate several hours or over night.

When you're ready to cook, heat 2 Tbsp olive oil in a large skillet over medium high.  Add chicken to skillet with tongs and discard the remaining marinade (some will stick to the chicken).  Saute until chicken is almost cooked through, then push it to one side of the pan and add the onions.  Saute the onions until they soften, about 3-5 minutes, then push them to the side of the pan.  Saute the tomatoes until they begin to soften, about 3-5 minutes more.  Stir everything together and let it simmer for about 5 minutes more, stirring occasionally.

To serve, open up a pita and spread with some toum or tahini.  Make a line of the chicken shawarma mixture down the center of the pita and add sliced pickes and a few french fries if you'd like.  Roll up the pita and serve with fries on the side.

Posted by Cheese with Noodles at 1:26 AM 5 comments: