My husband is crazy about casseroles, and I hadn't made one for a while, so decided to go with this one when I saw it on the Macaroni and Cheesecake blog.  This is a very simple casserole, but proves how nicely things can turn out if you use decent ingredients.  I'm quite certain that the same casserole made with canned chicken, cream of blank soup (which I do use sometimes, no regrets!), and frozen veggies would have landed several rungs lower on the casserole tasty-meter.  this is just a nice cozy casserole, nothing fancy, but great on a cold night and pretty quick to prepare! 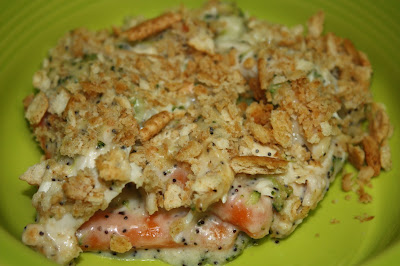 Preheat oven to 350 and grease a 2 quart baking dish.

Microwave vegetables in a covered bowl until barely beginning to turn tender, about 5 minutes.

In a large nonstick skillet, melt butter over medium-high.  Whisk in flour until smooth, then cook for one minute, whisking constantly.  Whisk in milk a little at a time, making sure it's completely smooth before adding more.  Whisk in the chicken broth in the same fashion.  Bring to a boil and simmer, whisking constantly, for another minute or two.  Remove from heat and stir in sour cream and greek yogurt, then seasonings.  Stir in chicken and veggies.

Transfer mixture to the prepared baking dish.  Melt butter and toss with the crushed crackers, then spoon the crumbs evenly over the casserole dish.

Bake until bubbling around the edges and crackers are golden, about 20 minutes.

This is another recipe from Catherine Newman over at Ben & Birdy.  I've meant to make it for a while, and am glad I finally did!  It turned out really well, my husband loved it.  He's not a fan of regular tamales and liked it a lot more than them.  I personally love tamales, and this tamale pie doesn't bear many similarities to them, but that's okay.  This honestly turned out better than I expected.  I've seen many recipes for tamale pie and always passed them by because I thought they'd be kind of boring, but I've had great success with all of Catherine's recipes, so decided to try her version.  I'll certainly make this one again!
This recipe is tweaked a bit from the original.  I had to add a bit more buttermilk (just milk plus a little vinegar) to make the batter... batter (instead of dough) and decided to put all the cheese on top because cheese seems to disappear into baked goods.  In the future, I'd like to experiment with using another can of beans instead of the corn and leave out the sugar, but it sure was good this way! 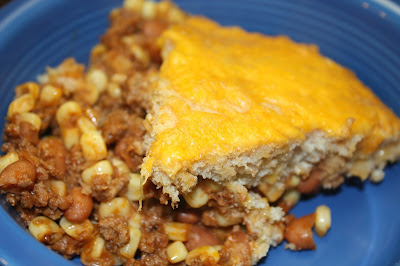 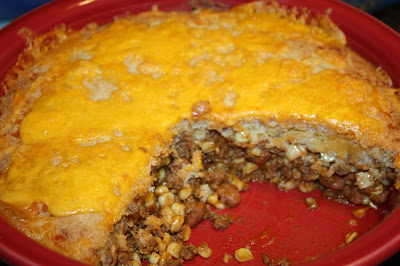 For this month's Secret Recipe Club, I was assigned the blog A Taste of Madness.  It's written by a Canadian woman named Cathleen.  Cathleen is a math teacher (how cool!) and enjoys doing yoga and traveling, in addition to making- and eating- desserts.  Sounds like we have a lot in common!

I'm not sure I'd seen A Taste of Madness before, but believe me, I'll be back frequently to try new recipes.  There were about 25 looking awesome ones that I bookmarked, and I didn't even go through her whole blog.  I actually made two recipes of hers this month, the Cottage Cheese Pancakes (which I added a smidge of vanilla to, they were amazing), and Coconut Oatmeal Cake.  My husband and I both really wanted to make her crumpet recipe but ran out of time, it's one we plan to make soon, though!  Cathleen is originally from the UK, so we figure she would know a good crumpet recipe!

This Coconut Oatmeal Cake was great.  I've seen recipes that called for a broiled coconut-pecan topping and always wanted to try it. I brought it to a friend's get together where we got to paint, and it got rave reviews from everyone.  It's so moist and the topping is delightfully sweet, crunchy, and a little chewy from the caramelization.  This is a perfect cake for winter because of the spices, oats, and rich topping!  I can picture it perfectly on a Thanksgiving or Christmas table.

My only change was to decrease the salt in the cake (I worried it would be too salty with 1 1/2 tsp), and for the topping, there was a difference between the types of sugar mentioned in the ingredients list and the recipe itself.  I decided to go with what the ingredient list said, and it turned out wonderfully! 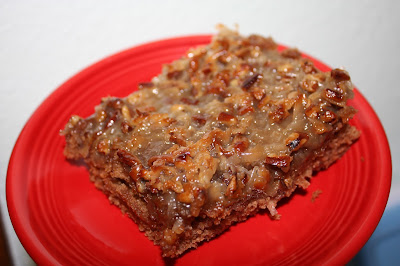 In a heat safe bowl, pour boiling water over oats and stir to combine.  Set aside to cool while you prepare the rest of the batter.

In a medium bowl, whisk together flour, salt, baking soda, and cinnamon.

Cream together the butter, sugar, and brown sugar, then stir in eggs until smooth.  Mix in the dry ingredients a little at a time, until smooth.  The mixture will be thick.  Mix in cooked oats.

Spread batter evenly in prepared pan and bake until a toothpick inserted into the center comes out clean, about 35 minutes.

When cake is almost done baking, prepare the topping.  Place the milk, butter, and brown sugar into a medium sauce pan and cook over medium until everything is melted and well combined.  Remove from heat and stir in coconut and pecans.

When the cake comes out of the oven, immediately top with the topping mixture.  Spread the topping as smoothly as possible so no bits of coconut or pecan sticks up, this will help prevent burning.

Place an oven rack at the highest setting, turn the oven to broil, and place the cake on the top rack.  Watch it very carefully (don't walk away!) and remove the cake immediately when the topping turns golden.  This will only take about 2 minutes.

Let cake cool, and serve.  It's great both warm and at room temperature.

This recipe for meatballs and sauce comes from Serious Eats.  It was actually the first recipe I made from Serious Eats, the description about the author's Friday Night Meatball tradition intrigued me.  I first made it a year ago and absolutely loved it.  The sauce is perfectly savory and flavorful, even though it doesn't have many ingredients, and the meatballs are among the best I've ever had.  I'm particular about tomato sauce and meatballs, so you know these are good!  The meatballs are great served over raw spinach, roasted veggies, or as meatball subs, too.  This recipe is simple, but takes at least two hours to get on the table, so plan accordingly!

Quick Note:  I've changed this recipe a little.  The biggest thing is that I use a lot less salt.  I also put the entire 1/2 C parsley into the meatballs.  Didn't realize until I'd made it a couple times that half the parsley was supposed to go in the sauce, but it doesn't hurt the meatballs at all!  Also, this most recent time I served the sauce and meatballs over whole wheat penne.  The plan had been to use spaghetti, but the box I thought was in the pantry had been used up!  Turns out the sturdiness of the penne really held up well to the sauce, I may do it this way in the future occasionally. 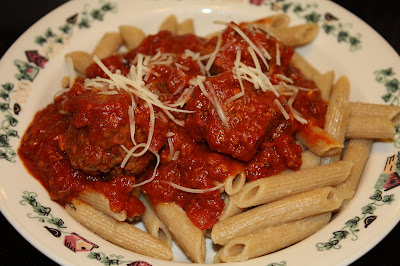 Heat butter/oil in a large pot over medium.  Add garlic and cook 1 minute, stirring constantly.  Add tomato paste and stir constantly for 1 more minute.  Add crushed tomatoes, salt, and pepper.  Bring to a simmer, cover pot, and reduce heat to low while you make the meatballs.

Heat oil in a large nonstick skillet over medium and add a single layer of meatballs.  Brown meatballs on all sides, turning gently with tongs.  Place meatballs into simmering sauce and brown the rest of the meatballs.

When all the meatballs are browned, stir them gently in the sauce making sure not to break them up, and simmer over low heat, uncovered (but use a spatter screen!), for 1 hour 15 minutes (you can go as long as 2 hours), stirring occasionally.  You'll have to stir more frequently as the sauce cooks down.  Serve sauce and meatballs over cooked pasta, sprinkled with parmesan.

Yield:  About 8 servings
Posted by Cheese with Noodles at 1:57 PM No comments: