I came upon this recipe for Teriyaki Chicken on the Cooking Classy blog a couple of weeks ago.  The sauce ingredients looked so good that I had to try it!  It turned out great.  A bit spicy, gingery, sweet (but not too sweet), and tangy.  My husband gave it a 10 out of 10, which isn't a rating he hands out willy nilly.  I had to add a little more cornstarch than the original recipe called for, but other than that, the recipe was spot on.  Next time I'm going to try adding the orange marmalade to the sauce pan after the cooking liquid has been strained so that the little bits of orange peel won't be strained out (I like the orange flavor), but that's the only change I would make. 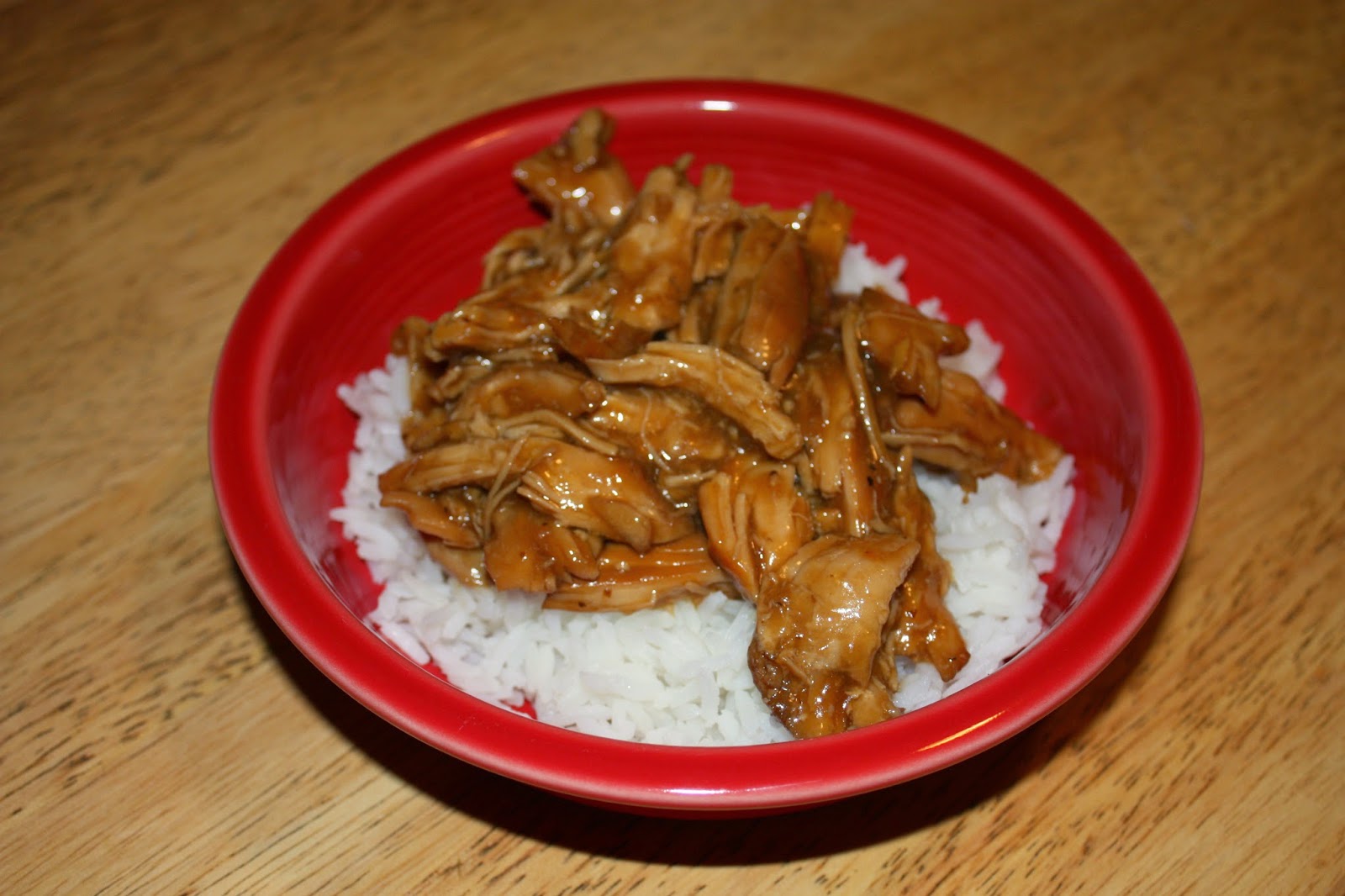 In a medium bowl, mix together everything except chicken, cornstarch, and water until sugar and marmalade are partly dissolved.  Pour into a slow cooker.  Add chicken breasts to slow cooker and turn to coat in the sauce.  Cover and cook on either low or high heat until chicken breasts are cooked through.  How long this take will depend completely on your slow cooker!

When chicken is done, remove it to a plate and refrigerate so it can cool down a bit while you finish the sauce.  Strain liquid in slow cooker into a small saucepan and discard the solids left in the strainer.  Bring cooking liquid to a boil.  Stir together the cornstarch and cold water until smooth, then pour it into the liquid, stirring constantly.  Simmer sauce for at least a minute or two so it can thicken and the cornstarch can cook completely.  Pour sauce back into slow cooker.

Shred the cooked chicken breasts, return them to the slow cooker, and toss with the sauce to coat.  Cover again and let cook until heated through, about 20-30 minutes.  Serve chicken over rice.

Yield: about 8 servings
Posted by Cheese with Noodles at 11:33 AM No comments:

They may seem like an odd choice for an adult, but Monster Cookies are my favorite kind of cookie!  They're easy to make, bright and cheery to look at, and most importantly, they taste great.  The peanut butter flavor is wonderful and the mix of 3 kinds of chocolate works really well.  There are tons of versions of Monster Cookies out there, and this is just my version.  Many use less peanut butter, have nuts or other things like pretzels or raisins, and I haven't seen any with white chocolate chips, but the white chocolate chips add a lot!  My version is based on Paula Deen's recipe.

For this batch, I used a giant 1/3 C cookie scoop that my mother-in-law gave us recently.  The cookies turned out comically huge, big enough that even cookie lovers like us break them in half to share.  You can make them smaller (slightly larger than a golf ball is good), but come on, they're Monster Cookies- they should be bigger than average! 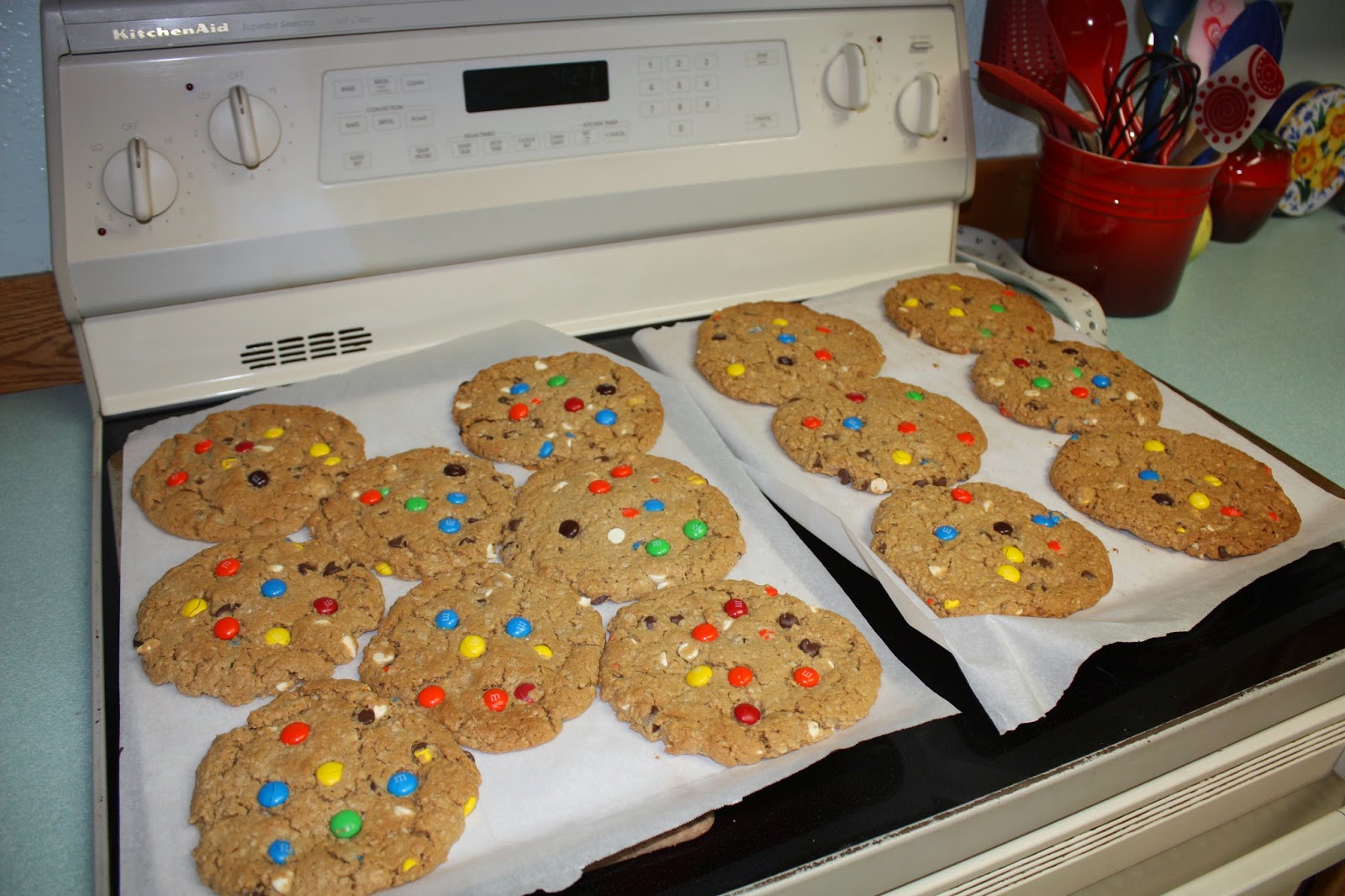 In a large mixing bowl, mix together butter, the sugars, peanut butter, eggs, salt, and vanilla until smooth.  Scrape down the sides of the bowl and add baking soda, oats, and chocolate, and stir until everything is well combined, but don't over mix.

Measure dough into 1/3 C portions and roll each portion into a ball.  Place dough balls about 3 1/2 inches apart on the cookie sheets.  Top each dough ball with 6 more M&Ms, then flatten the cookies with the palm of your hand because they don't spread a ton on their own.

Bake cookies until light golden, about 15-20 minutes depending on your oven.  Let the cookies cool on the pans for 10 minutes, then place them on a cooling rack to finish.

Yield: 14 jumbo cookies or about 3 dozen smaller ones
Posted by Cheese with Noodles at 3:51 PM No comments:

So what I'm getting at here is that I'm always trolling for more mac and cheese recipes, and when I do make one, it has to be freaking fantastic if it's going to join my little mac and cheese recipe family.  Ladies and gentlemen, I'm happy to say there's a new cheesy, noodley member of the family!  The recipe is called Mrs Jones' Baked Macaroni and Cheese and I found it on a blog called Chick in the Kitchen.  I honestly have no recollection of how I came upon the recipe, I just know it was a couple of months ago.  We moved recently and with all the craziness of buying a house, packing, moving, and not being able to use the kitchen for several weeks, I had in the back of my mind the idea that I would make this mac and cheese recipe once I made my way back into the kitchen.  That happy day finally occurred recently, so of course this is one of the first things I made!  Oh and for those wondering, apparently Mrs Jones was the preschool teacher of the cousin of the blog author, Dara, some number of years ago, and the recipe has been in her family ever since. I altered it a smidgen (increased the Worcestershire sauce and added some salt), but my version is pretty true to the original.

Okay, on to what people may actually care about: a description of the recipe.  This is NOT a creamy, saucy mac and cheese.  There's actually no sauce to speak of.  Instead, the cheese, eggs, and milk make a rich, custard-like binder for the noodles.  It's not dry at all, either, and that's coming from someone who loves lots of sauce!  The mac and cheese also has awesome flavor from all of the sharp cheddar and the dried mustard, Worcestershire sauce, and cayenne pepper in the sauce.  All the flavors really work together perfectly.  Even my husband really liked this mac and cheese, and he's a guy who groans whenever I make any recipe other than Creamy Baked Mac and Cheese because he loves that one.  This recipe is definitely a keeper and one I'll still be making 50 years from now!  Thank you, Dara, Dara's aunt, and Mrs Jones! 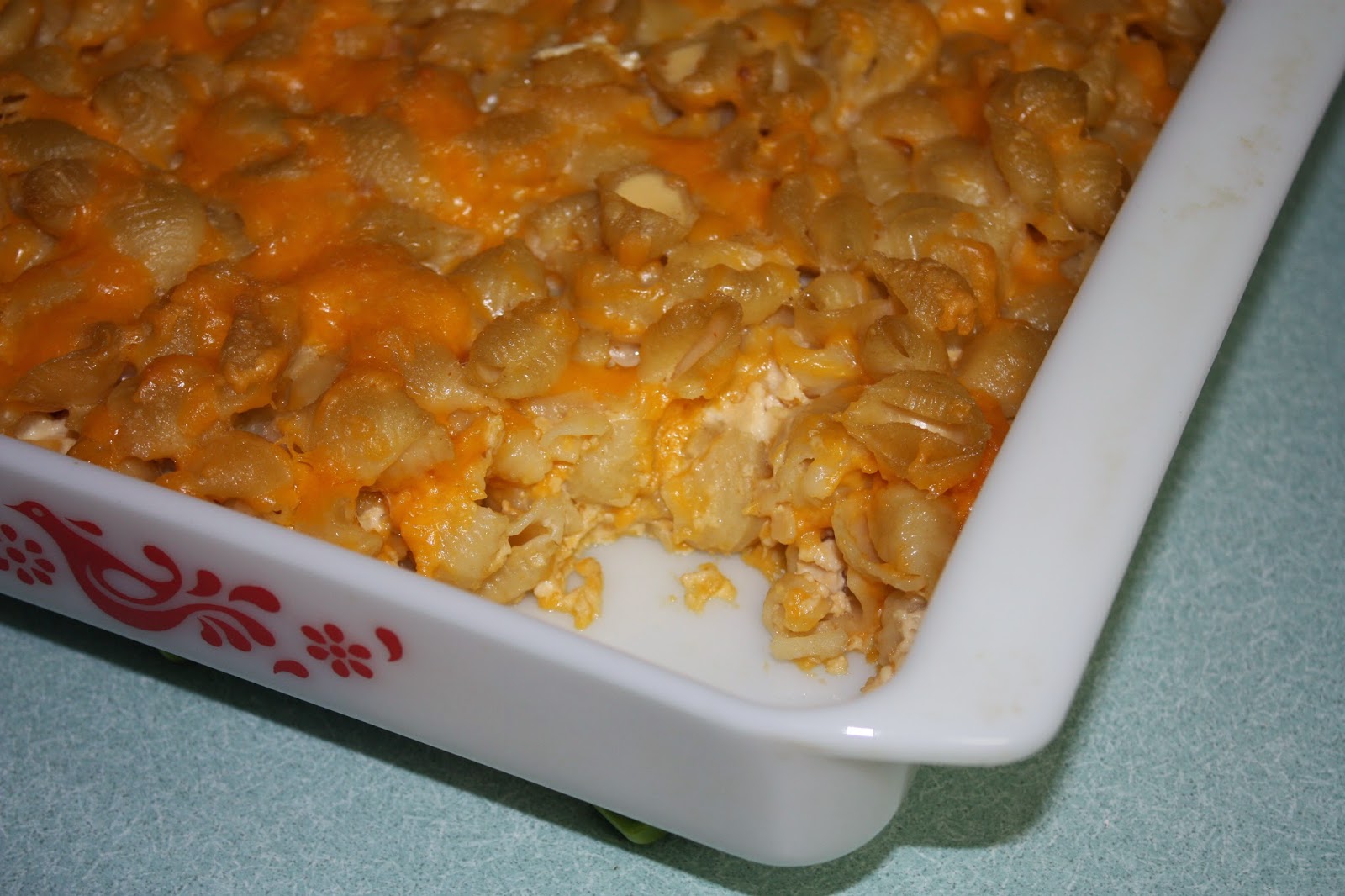 Preheat oven to 350 and grease a 9 by 13 casserole dish.  Boil shells in salted water, drain, and return to pot.  Add butter and stir until it's melted, then let the pasta cool for a few minutes so it won't melt the cheese.  Stir it occasionally so it will cool faster.

While the shells cool, whisk the eggs in a small bowl until smooth.  Whisk in evaporated milk, salt, ground mustard, cayenne pepper, and Worcestershire sauce.
When pasta has cooled a bit, stir in the grated cheese until it's evenly distributed.  Spoon pasta into the prepared baking dish and pack it down lightly with the back of a spoon.  Pour the egg mixture evenly over top.

Bake, uncovered, until the edges are bubbly and the top is golden, about 30 minutes.

Yield: 8-10 main dish servings or twice as many side servings.  Mac and cheese is ALWAYS a main dish at my house!
Posted by Cheese with Noodles at 12:35 AM No comments:

For this month's Secret Recipe Club, I was assigned Lisa's blog, Sweet As Sugar Cookies!  I had such a hard time choosing a recipe because Lisa's blog is just full of amazing looking desserts.  She makes other things, too, and I almost chose either Oyster Sauce Meatballs or Spicy Peanut Butter Meatballs (will have to try those later), but ended up choosing her Buttermilk Spice Cake because it looked like the perfect recipe for autumn.  We just purchased and moved into our first house, and this cake had the honor of being the first dessert I made!  It was definitely a good choice, because we loved how the cake turned out.  The spices were fantastic and the amount of ginger gave it a little bit of a burn, in the best way possible.

My one change from the original recipe was to use a maple glaze on top instead of cream cheese frosting.  I used the glaze recipe from Pound Cake with Maple Glaze, and it was the perfect accompaniment to the spicy, flavorful cake.

I will definitely make this cake (and the glaze!) again, but will try using cake flour instead of all purpose flour, and a 7 by 11 pan instead of 8 by 8.  There was a lot of batter for an 8 by 8 pan and by the time the center was cooked, the edges were a bit dry and it was a bit over browned, to the point that I covered the cake with foil for the last 10 or 15 minutes of baking.  I think a slightly larger pan will help with this!

Update:  I made this again for Thanksgiving dessert with cake flour and baked it in two 8 inch round cake pans.  The cakes only took 20 minutes to bake and were SO light, fluffy, and soft!  I had serious issues getting the cakes out of the pans (next time will put parchment paper rounds in the bottoms) and ended up making a trifle with the broken cake pieces instead of a layered cake frosted with caramel cream cheese frosting, but it was definitely a hit this way. 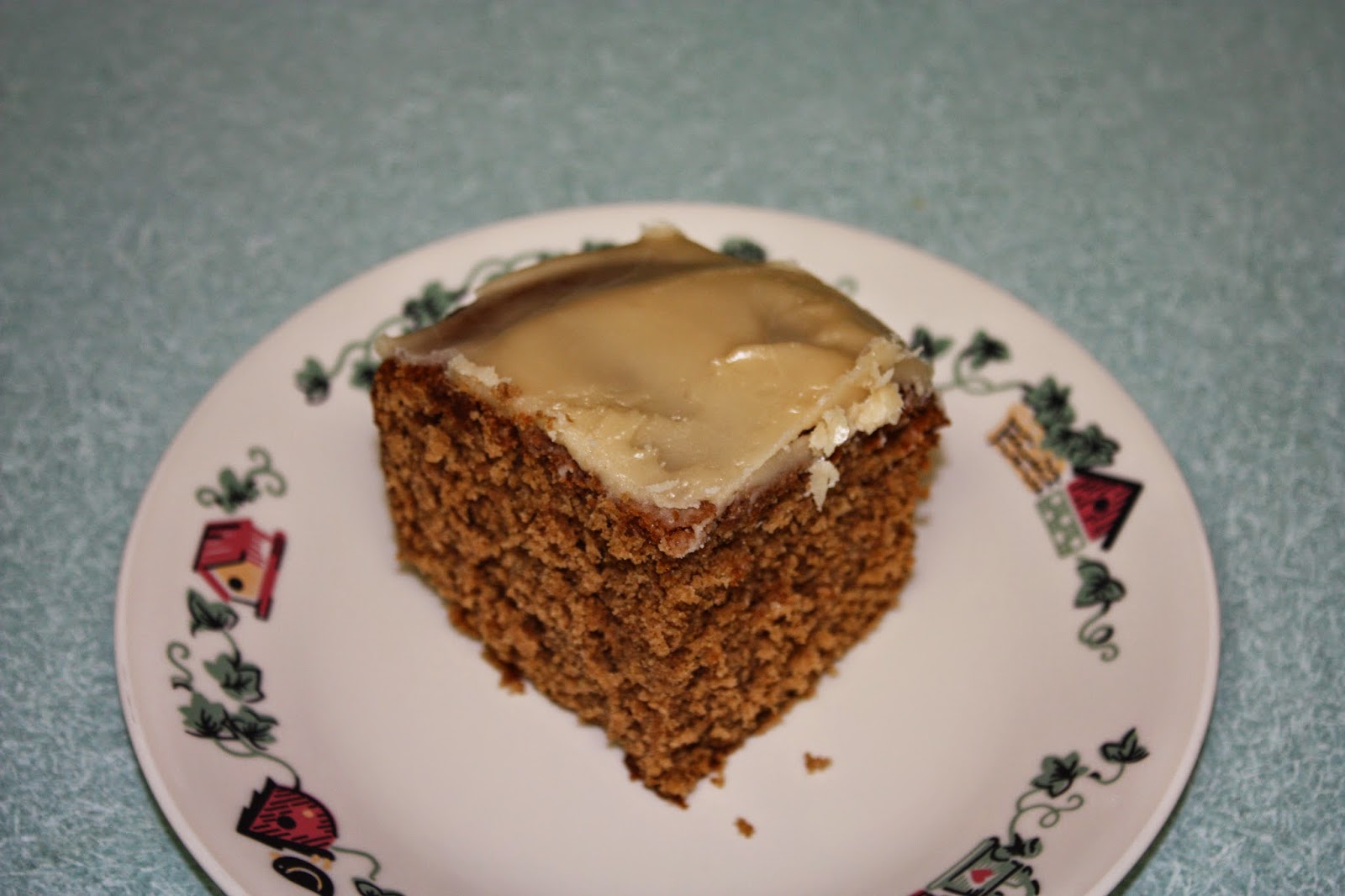 Spread batter in the prepared pan, and bake until a toothpick inserted into the center comes out clean, about 55 minutes.  You may need to cover the cake with a sheet of aluminum foil, shiny side up, if it browns too much.

Remove cake from oven and allow to cool about 20 minutes.  It does not need to be completely cooled before you add the glaze.

Place butter and maple syrup in a small pan and heat over medium until butter is melted.  Remove from heat and whisk in the powdered sugar until smooth.  Spread over partly cooled spice cake.  Let cool until the glaze has set.  You can either serve it while still warm, or let it cool completely- it's great either way!

An InLinkz Link-up
Posted by Cheese with Noodles at 10:17 PM 8 comments: