This is an incredibly simple recipe for tofu that has turned into one of our favorites!  It's peppery with a smidge of sweetness from maple syrup.  Doesn't sound like much, but trust me when I say it's delicious!  The edges get all crispy and yummy and it's just an all around solid, reliable recipe.  Nice how such easy recipes with minimal ingredients often turn out really well.  I've made this 5 or 6 times since I stumbled upon the recipe about a year ago at Healthy Happy Life.  I always serve it with some type of salad and sometimes steamed rice or noodles.

Quick Note:  I don't bother drying my tofu with paper towels or pressing out the excess water or anything, I just dump out the water in the refrigerated package.  It's always turned out just fine! 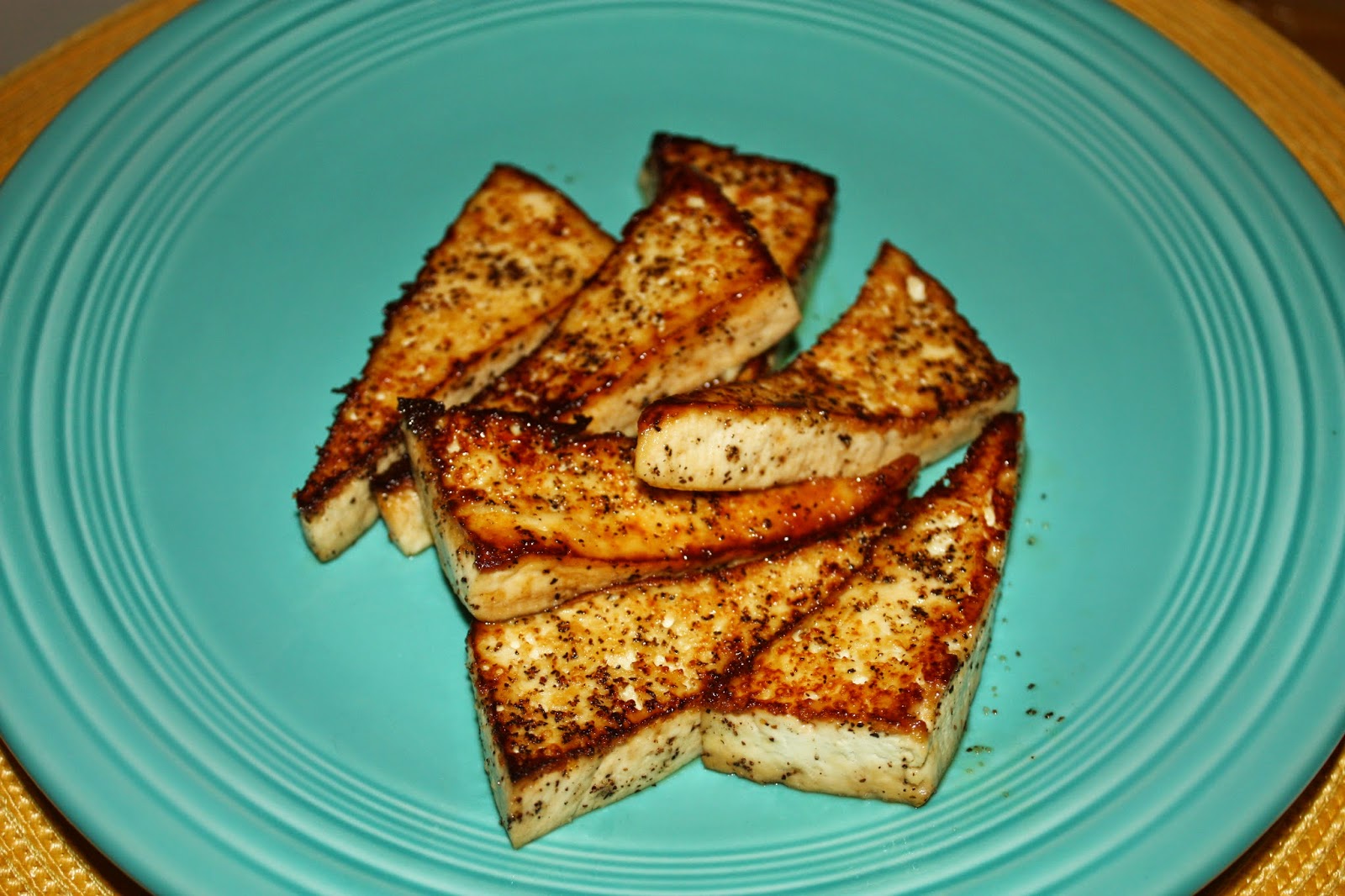 Cut tofu into thick slices, then cut them into triangles.  Heat oil in a large nonstick skillet over medium-high.  Add tofu and sprinkle generously with pepper, then salt.  Let tofu cook without moving them until they begin to turn a little golden on the bottom, which will take about 3 minutes.  Drizzle the maple syrup into the pan and move the tofu around with tongs so the syrup gets evenly distributed.  When bottom of tofu is golden, flip the slices and cook until they turn a deep golden color.

Yield: 2-3 servings
Posted by Cheese with Noodles at 10:26 PM No comments:

I made this recipe once about 4 years ago, then not again until just recently when I happened to have leftover hard boiled eggs, bacon, and English muffins that needed to be used.  They're way too good to only make when I happen to have the correct leftovers!  My husband loved them and said they're like Egg McMuffins from McDonald's, only much better.
This recipe is from the Pioneer Woman blog, I changed it a tiny bit.  She says the mixture can be made ahead of time and even spread on the muffins the night before and then refrigerated.  I'll have to give this a try sometime when we have overnight guests. 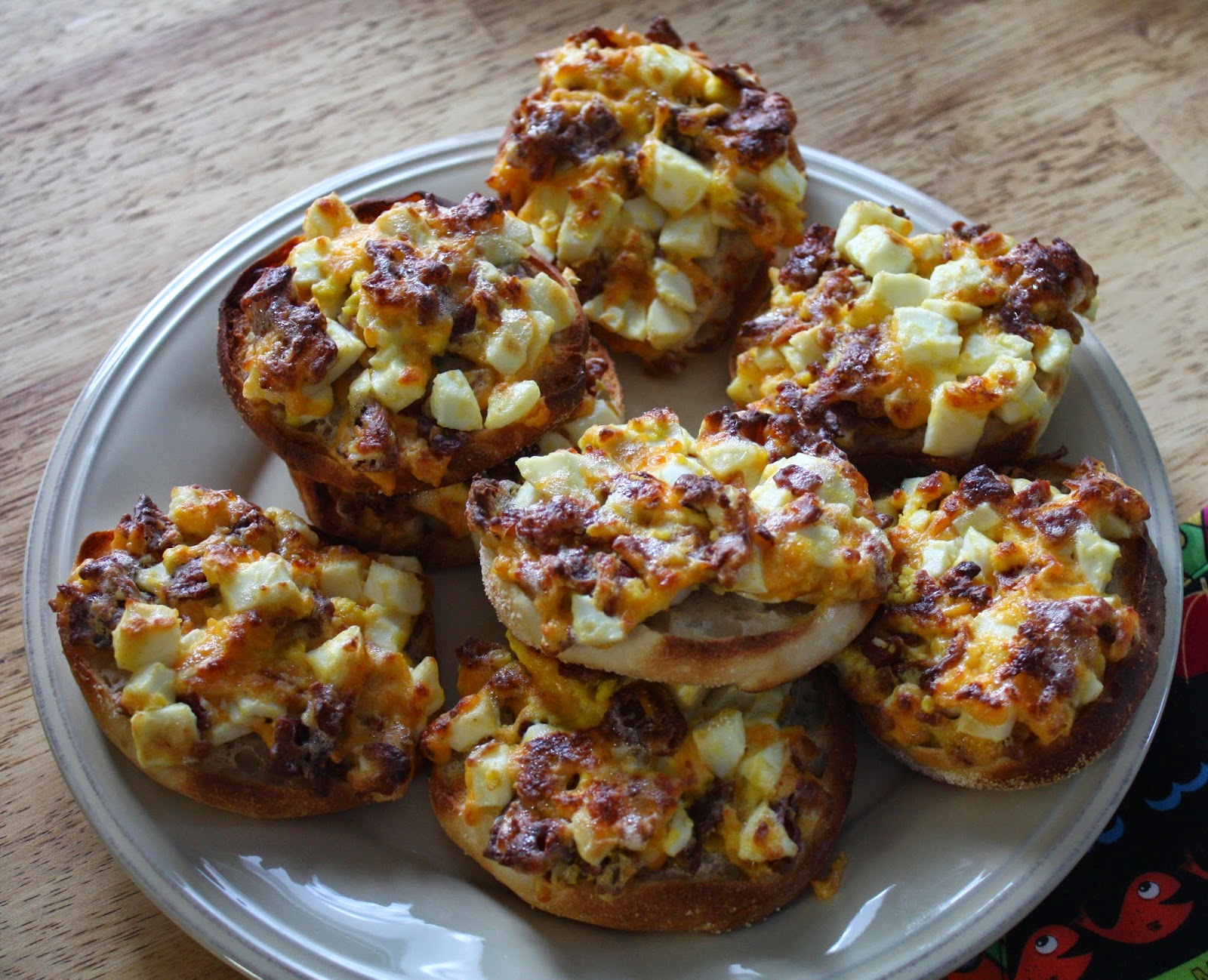 4 hard boiled eggs, peeled and diced
4 slices bacon, cooked and crumbled
2/3 C shredded cheddar
1/3 C mayo
1/2 T dijon mustard
1 t Worcestershire sauce
1/4 tsp garlic powder
4 English muffins, cut in half
Preheat oven to 350 and line a baking sheet with foil or parchment paper.  Stir together everything except muffins.  Spread filling evenly over each muffin half.  Arrange on baking sheet and bake muffins for 10 minutes.  Turn on broiler and broil until the topping is lightly browned, about 3 minutes.  Keep a close eye on the muffins during this time because they can burn very quickly!  Serve muffins immediately.
Yield: 4 servings
Posted by Cheese with Noodles at 11:42 AM No comments:

Email ThisBlogThis!Share to TwitterShare to FacebookShare to Pinterest
Labels: breakfast

These muffins from Taste of Home knocked our socks off!  A lot of supposedly orange flavored baked goods barely taste like orange, but not these.  Tender, buttery, lots of orange flavor... Yum!  These are so sweet and tasty that I'm not entirely sure they aren't cupcakes without frosting.  They also stay good for several days, we enjoyed the last of the batch a good 5 or 6 days later and they were still really good.  I'm going to experiment with substituting half of the butter with half a cup of applesauce (so 1/2 C butter and 1/2 C applesauce) just so they're a little less heart attack-y, but definitely no complaints in the flavor department as the recipe is written. 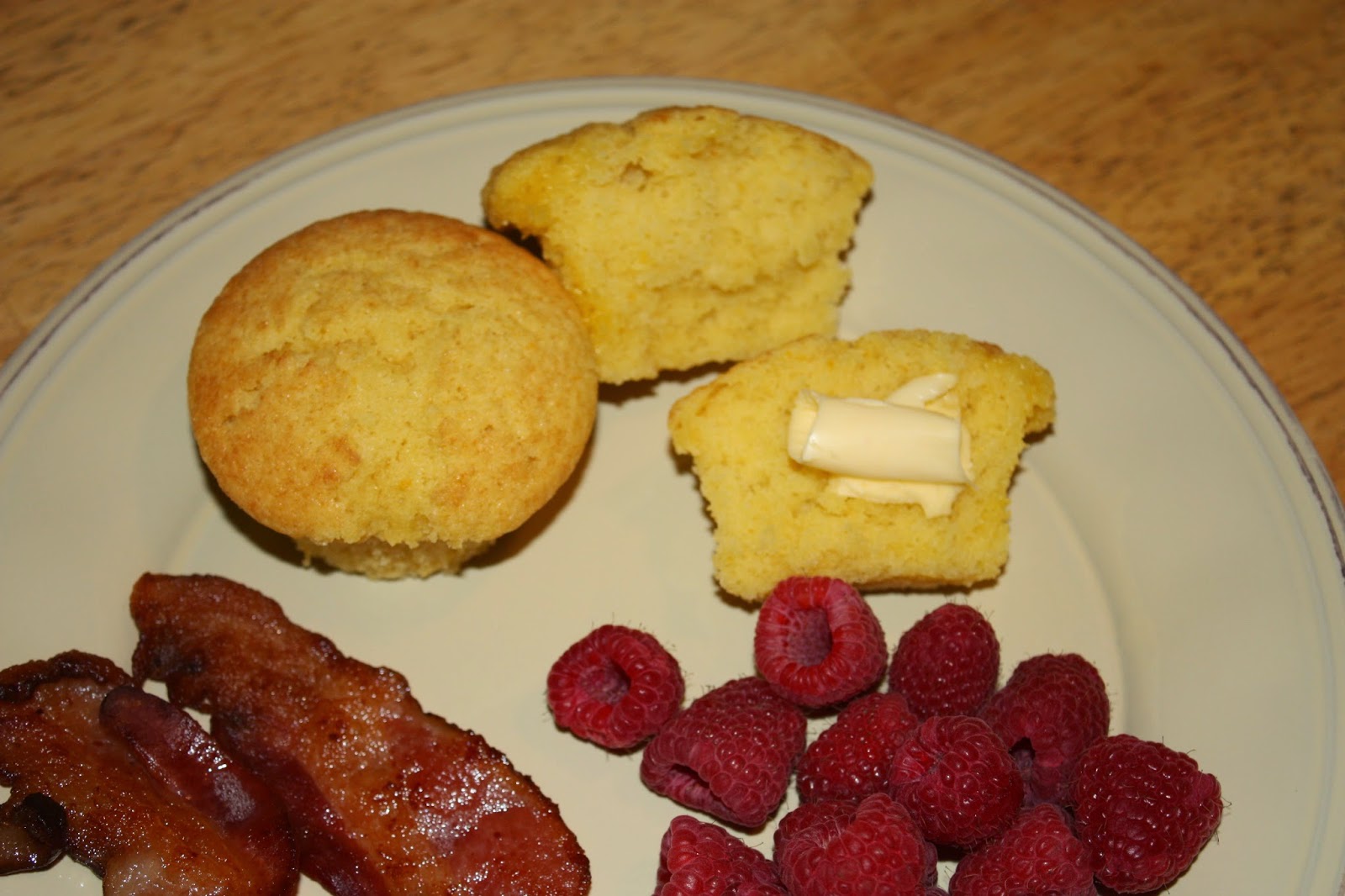 Preheat oven to 375 and either line a muffin tin with muffin papers or grease the muffin tin.  You will need about 18 prepared muffin cups, but you may want to start with only greasing/lining 15 because there's some variation in the capacity of muffin tins.
Cream together butter and sugar, then beat in egg yolks.  Stir in orange zest, baking powder, and salt.  In a measuring cup, stir together orange juice and extracts.

Alternate stirring the orange juice mixture and flour into the creamed butter mixture, just until everything is incorporated.  Don't over mix!

Beat egg whites until stiff peaks form, then gently fold them into the muffin batter by hand, just until no white streaks remain.

Divide batter among prepared muffin cups.  You want each cup to be about 2/3 full so they don't overflow.

Bake until they turn golden on top and a toothpick inserted into the center comes out clean, about 18-20 minutes.

Yield: About 18 muffins
Posted by Cheese with Noodles at 5:39 PM No comments:

This is definitely one of the best meatloaf recipes I've ever made, or eaten!  My husband liked it a lot, too, but what's not to like?  We weren't even tired of it on day 4 of leftovers.  This recipe comes from the blog Buns in my Oven, and as usual, I made a few changes.  I'd like to note that using both the cheese and the bacon isn't strictly necessary.  It's certainly good this way (and how I did it!), but I think it would be good too with one or the other of you're reluctant to dump both cheese and bacon into meatloaf.

Quick Note:  I used lean ground beef, I believe 93% lean.  Probably because of this, none of that gross looking meatloaf sludge formed around the bottom of my meatloaf!  Something to consider if you usually use beef with a higher fat content. 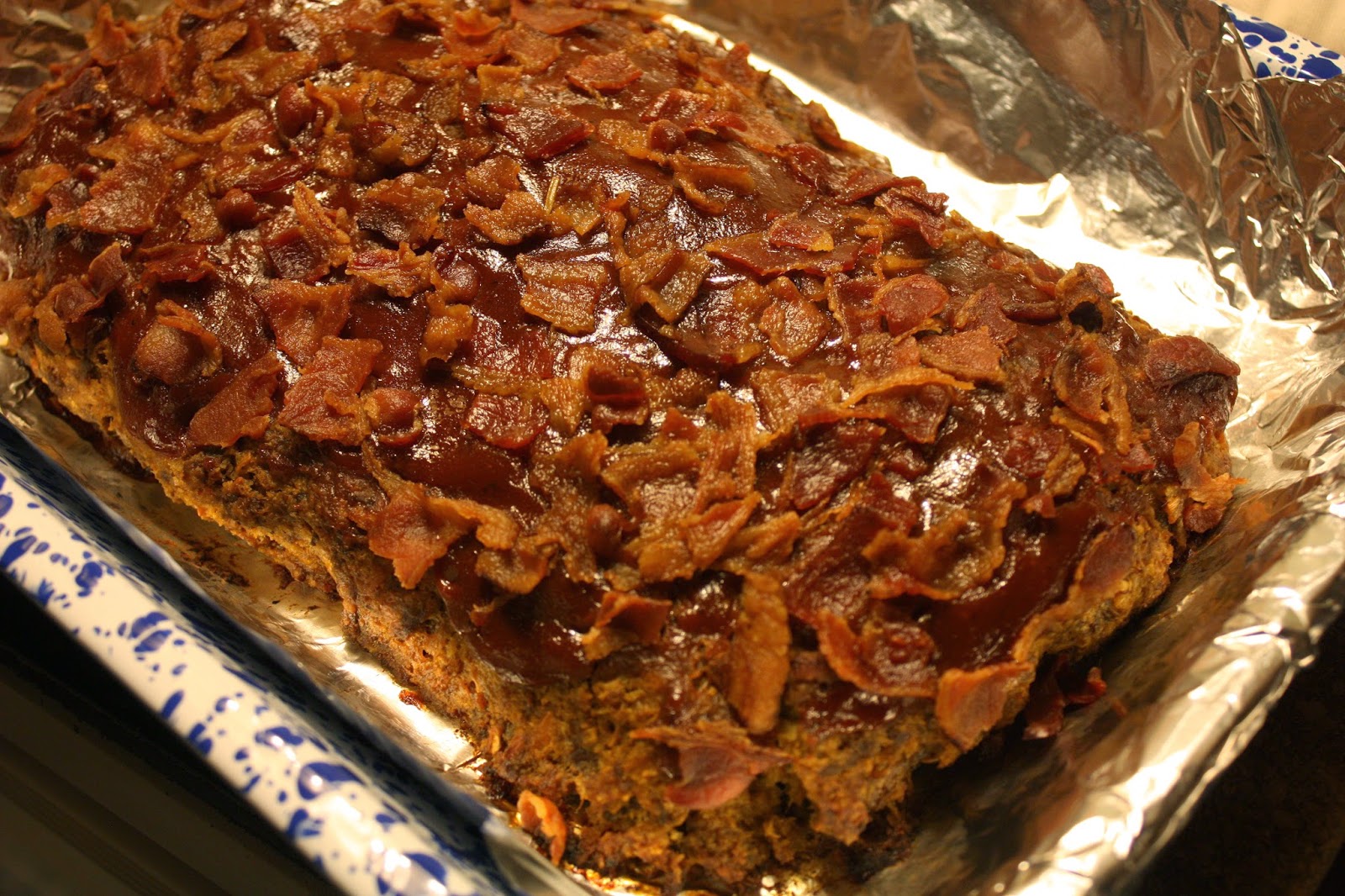 And we're back to ugly photos...

Place meatloaf mixture in prepared pan and form into a loaf, about 2 inches tall and 8 by 10 inches wide.  Spread the other half of the BBQ sauce/mustard mixture over meatloaf and sprinkle with crumbled bacon.  Bake until internal temperature reaches 160 degrees, about 45 minutes.

Yield:  About 8 servings
Posted by Cheese with Noodles at 4:28 PM No comments:

I came upon this recipe on the Ben & Birdy blog a couple of weeks ago, and was so intrigued that I made the batter that night so we could have waffles the next morning.  They were so good that we had waffles again this morning, too!

This is a very old recipe and was first published in the Fannie Farmer Cookbook in 1896.  This is an amazing cook book (read more about it here), and I've actually owned it since I was a teenager, but hadn't made these waffles until now!  What makes this recipe unique is that the batter has yeast in it.  You mix most of the ingredients up the night before (very quick and simple), cover it, let it sit out all night, then just stir in a couple more ingredients in the morning and get waffling.  What's even better is that you can keep the batter in the fridge for several days.  I haven't tried this yet and have cooked all of the batter each time (the leftovers are great heated in the toaster), but definitely will at some point.  These will probably become a Christmas morning tradition because the prep time in the morning is so minimal, and the waffles themselves are amazing!

I had what I considered to be the best waffle recipe before, but plan to only make raised waffles from now on unless we're suddenly facing a waffle craving and don't have time to let the batter rise.  The other waffle recipe is very good, but this one undoubtedly blows it out of the water.  It's even dethroned pancakes as my favorite breakfast food.  These waffles have a thin, crisp crust that softens very quickly.  My husband prefers his waffles very anemic and floppy, but likes the delicate crust on these.  Inside, they are very light, airy, and soft, not unlike the inside of a really fluffy, fresh from the oven roll.  The smell while they cook is incredible if you're a fan of yeast breads, and the waffles themselves have a bit of a yeast flavor.  The waffles actually remind us a tiny bit of french toast.  If you're at all fond of waffles and have a waffle iron, you really should try this recipe once!

This recipe is very slightly changed from the original, in that 1/4 C butter is used instead of 1/2 C.  That's how it's written on the Ben & Birdy blog, and we have absolutely no complaints about it this way.  I'll probably try the full amount of butter at some point, just because.  Also, when I made the waffles this time, I waited to add the salt with the eggs and baking soda because salt kills yeast.  There was no noticeable difference in the outcome, so I didn't change the recipe.

Quick Note:  I used a regular waffle iron for this, not a Belgian waffle iron.  No promises on how the recipe turns out with a Belgian iron!  Also, because the waffles lose their crisp exterior very quickly, I suggest putting the waffle iron right on the breakfast table and serving the waffles as they come out of the iron.  You can also add a little (1/2-1 tsp) cinnamon to the batter if you want something extra special. 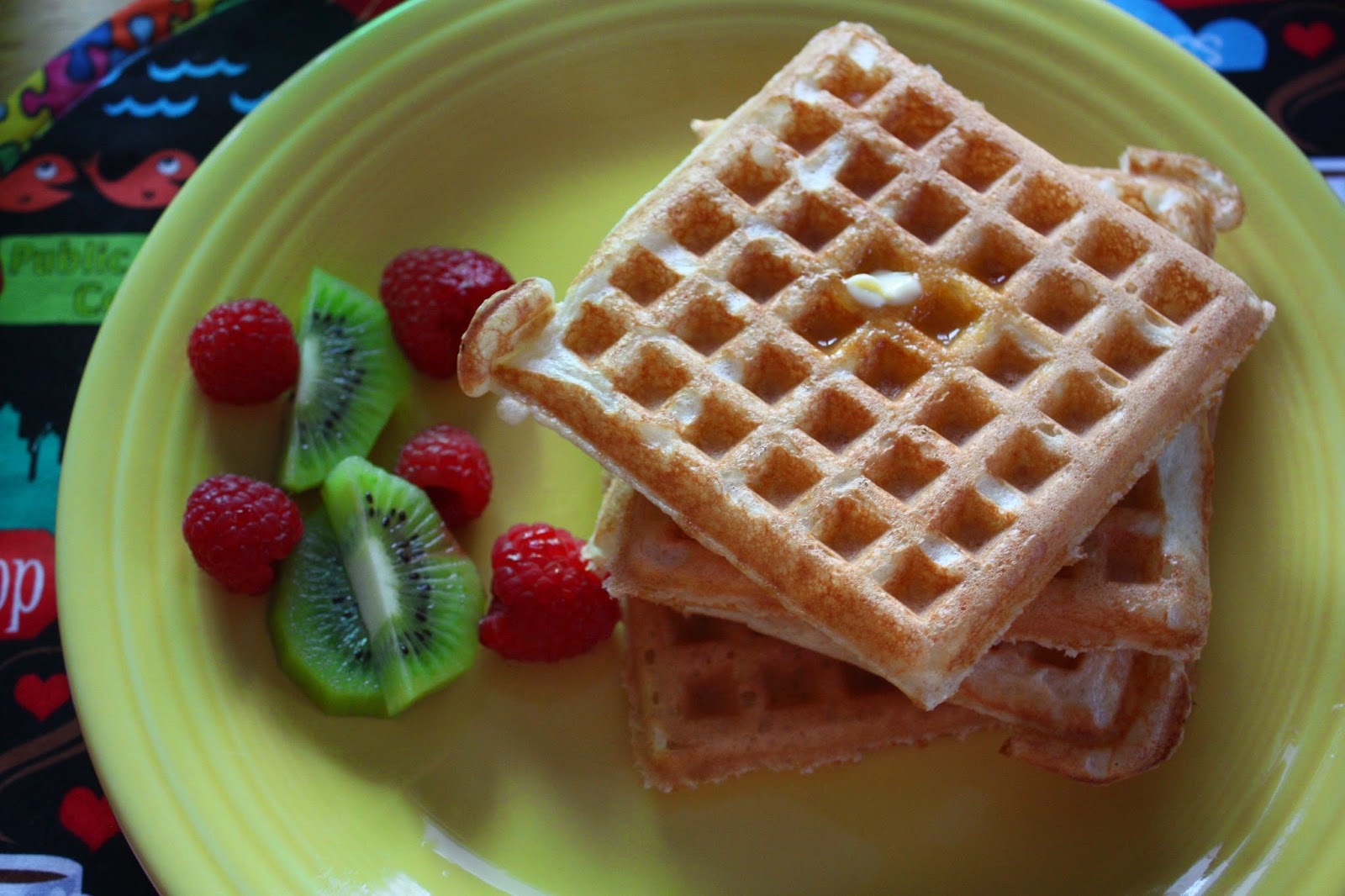 It's a miracle, I managed to take a non-disgusting photo!  Thanks, natural light!

In a very large bowl (must be large so the batter doesn't overflow as it rises!), dissolve the yeast in the warm water.  Stir in the warm milk and melted butter, making sure they aren't hot enough to kill the yeast.  Add the flour, sugar, and salt, and whisk until well combined.  Cover the bowl with plastic wrap and let sit at room temperature over night.

Yield: About 6 full size waffles (so 24 small ones when torn apart), or enough to feed about 4 people.
Posted by Cheese with Noodles at 3:48 PM No comments: