This recipe isn't life changing or anything, it's just yummy and cozy and easy.  It's a modified version of one from Tasty.com.  I've made it a couple of times and we like it.  Next time I'd like to add some halved cherry tomatoes, but I'm a tomato lover.  Note that you can use a different kind of pasta, but the type of pasta definitely has an impact on how long it takes to cook!  Fusilli takes about 20 minutes in this dish, penne is closer to 30.  I personally prefer quicker so will go with the fusilli!  You can also use a diced onion and 3 cloves minced garlic instead of the onion and garlic powders, just saute the onion with the ground beef and then toss in the garlic with the seasonings.

Posted by Cheese with Noodles at 11:59 AM No comments:

A while back, I had a sudden craving for rice pudding.  This was odd because I'd never had rice pudding before.  I went ahead and made it though and it was exactly as good as I'd hoped!  You should try it, too.  It's good hot or cold, but we both preferred it hot.  You could add raisins at the end if you want, but I am in general not an "add raisins" kind of person.

2 1/2 C milk
1 1/4 C water
1/2 tsp salt
3 Tbsp butter
1/2 C sugar
1 tsp vanilla extract
sprinkle of cinnamon
In Instant Pot, stir together rice, milk, water, and salt.  Put on lid, seal, and push Porridge button.  It will cook for 20 minutes.  When the 20 minutes are up, do a 10 minute Natural Pressure Release, then quick release the rest of the pressure.  Stir in the butter, sugar, and vanilla.  Spoon into serving bowls and sprinkle with a little cinnamon.
Yield: 6 servings
Posted by Cheese with Noodles at 11:49 AM No comments:

This is just a nice chicken fajita recipe, complete with lots of veggies.  It seems that most recipes like this use lime juice, which is of course good, but the lemon juice here is a tasty change.
The recipe is from Taste of Home.  I changed it quite a bit and added a lot more vegetables.
Chicken & Veggie Fajitas

2 bell peppers, cut into strips
8 oz mushrooms, sliced
pint cherry tomatoes
for serving:
tortillas
desired toppings (cheese, sour cream, guacamole, salsa, etc)
Stir together marinade ingredients, add to sliced chicken and refrigerate 1-6 hours.
Heat 2 tbsp canola oil over medium in large skillet and add onions.  Saute 2 minutes.  Add bell peppers and mushrooms, saute until veggies are cooked to desired tenderness.  Remove to large bowl and keep warm.
Add an additional tablespoon of oil to skillet.  Add chicken and marinade.  Cook until chicken is cooked through.  Add tomatoes and cook until about half of the tomato skins have popped open.  Add reserved veggies back to skillet and heat through.  Serve in tortillas with desired toppings.
Posted by Cheese with Noodles at 1:30 PM No comments:

This recipe's name pretty much explains what it is.  It isn't anything fancy, but very tasty and could be made for any meal.  The recipe is from Budget Bytes and I thought it was genius to bake the biscuits with the ham and cheese inside instead of adding it later.  This way the cheese gets bubbly and perfectly melted, and the ham gets a little browned.  Yum!  You could add a little mustard if you wanted, but they're very good as is.
The toothpicks keep the top biscuits from falling off and the ham from sliding off.  Go on and leave the toothpicks in until you're ready to eat the sandwiches because you'll probably end up with major "drift" if you take them out too soon. 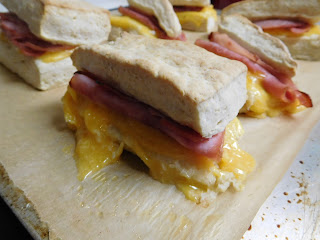 Ham & Cheese Biscuit Sandwiches
2 1/2 C flour
4 tsp baking powder
1/2 Tbsp sugar
1 tsp salt
about 1 1/3 C cream
6 slices cheddar cheese
1/2 lb of your favorite ham from the deli, I used Boar's Head Tavern Ham, sliced
Preheat oven to 400.
Stir together flour, baking powder, sugar, and salt.  Pour 1 C cream over top and mix together with a spoon.  Add additional cream as needed (only a tablespoon or so at a time) until you have a dough that holds together nicely and isn't too dry.  Form into a ball.
Dust a clean surface with flour and place the ball on top.  Squish with your hands to make a rectangle, then dust with more flour and roll out into a half inch thin rectangle approximately 8 by 11 inches.  Cut into 12 biscuit squares, in 3 rows of 4.
Line a baking sheet with parchment paper and put half of the biscuit squares on the sheet.  Top each with a slice of cheese (broken to fit as needed), then evenly divide the ham among them.  Top with the 6 leftover biscuit squares, then secure with a toothpick so the tops won't slide off.
Bake until the top biscuit is golden, about 15 to 20 minutes, depending on your oven.
Serve immediately, but remember not to eat the toothpicks!
Posted by Cheese with Noodles at 11:00 AM No comments:

I'm back!  Wasn't gone for any particular reason and I was still cooking, just not adding new recipes to the blog.  Anyway!


Because I am me, occasionally I just google "mac and cheese."  On my most recent googling, I came upon the photo for this Instant Pot mac and cheese over at Family Fresh Meals.  It looked so good and creamy, didn't have either of the Devil's Cheeses (American cheese or Velveeta), and I love my Instant Pot, so it got slapped on the menu for Easter.
Oh boy, did this mac and cheese not disappoint!  It is simply phenomenal.  Silky smooth sauce, very cheesy, very creamy, great flavor.  The spiral noodles hold onto the sauce perfectly and the garlic powder- something I had never added to mac and cheese- adds something really nice and subtle.  My beloved husband, who has been staunchly loyal to Creamy Baked Mac & Cheese, gave it 10/10 and thought it was almost as good as his favorite.  Which he says gets 11/10 because why not?
Make this if you have an Instant Pot and love mac and cheese!  I'm also happy to say it reheats decently.  Not the best ever and not as creamy, but it does not deconstruct into a puddle of stringy, overcooked cheese and grease.
Quick Note:  Please be sure to use fusilli pasta.  Different shapes of pasta have different cooking times and need different amounts of liquid to cook properly.  I have no idea how this would turn out with macaroni or some other shape of pasta.  Also, one pound of fusilli means literally a pound.  16 ounces by weight, not by volume.  I'm adding this information because a lot of people in the comments over on Family Fresh Meals experienced some confusion in regards to these two things! 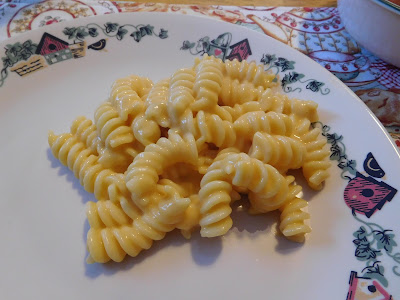 1 tsp dried mustard
1 tsp salt
1/4 tsp garlic powder
3 Tbsp butter
1 lb fusilli pasta (the larger corkscrew type)
5 oz can evaporated milk
12 oz sharp cheddar, freshly grated
4 oz monterey jack, freshly grated
1 oz parmesan, freshly grated
In the Instant Pot, stir together water, dried mustard, salt, garlic powder, and butter.  Make sure there are no lumps of dried mustard or garlic powder.  Add pasta, stir, and press down gently with the spoon to make sure the pasta is as covered with liquid as possible- there should not be an island of fusilli above the surface of the liquid.
Place on Instant Pot cover, set to seal, and cook on manual for 4 minutes.  Place a dishcloth over the steam release vent, then do a quick pressure release.  There is a very good chance that starchy water will spray up out of the steam release vent, so do keep the towel on it!
Since the Instant Pot is done cooking, it will have switched to Keep Warm.  Don't turn it off!
When all the pressure has been released, remove the lid and stir the pasta.  There will still be some liquid in the pot, that's fine- do not drain it.  Add the can of evaporated milk, then stir in half of the cheese until completely melted.  Then add stir in the rest of the cheese and dig in!
Enjoy your mac and cheesy heaven!
Yield: 8 side dish servings or 6 main dish servings

Posted by Cheese with Noodles at 11:33 PM No comments: