On the weekends I like to make a nice breakfast.  Recently I ran across a recipe for cinnamon roll pancakes and HAD to try them ASAP, so I decided to surprise my husband with them for breakfast this morning because he loves cinnamon rolls just as much as I do.  They are more complicated than regular pancakes and I honestly only recommend you try them if you have experience with making and flipping regular pancakes, but they are so worth it!  I burned the heck out of my pinkie when wiping out the pan between pancakes and I still think they were worth it.  My husband declared them to be the best pancakes he's ever eaten and I must agree.  They are everything wonderful about cinnamon rolls and pancakes, all in one delicious, fluffy package.  I think they would make a superb breakfast on Christmas morning because they're truly special, but quicker and less labor intensive than regular cinnamon rolls.

This recipe is originally from the Recipe Girl blog.  She has great photos to help you out as you make the pancakes!  It's kind of amusing, I first came across the recipe on a different blog.  That blogger had changed the recipe a fair amount and left some important things out (like wiping the pan out between pancakes).  As I went along, there were a few things I needed to tweak, but after I typed up this recipe and found the original on the Recipe Girl blog, I realized that most of my changes mirrored exactly what was in the original, though I did make a few other small ones.

Sorry my pancakes aren't so pretty.  The one you see is the first one I made.  I burned my finger while wiping out the pan after the very first one so it was hard to control the cinnamon swirl on the others and they look even worse!  Still taste great though.

Update: I've since made these pancakes without the cinnamon swirl and they're perfect!  Thick, fluffy, and yummy. This is now my default pancake recipe, and that's saying a lot because I've tried many pancake recipes. 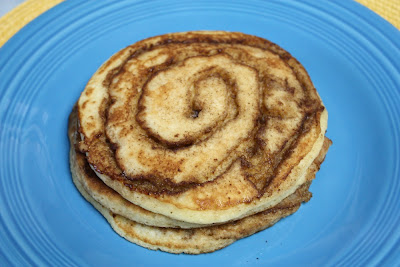 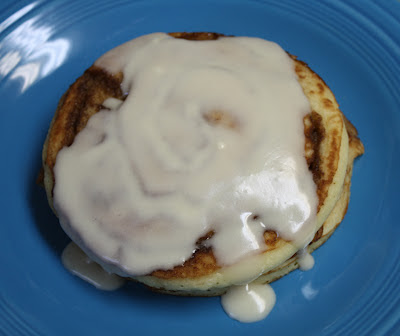 Make the batter next.  In a medium bowl, whisk together flour, baking powder, and salt.  Add milk, egg, and vegetable oil, and whisk until smooth.

To make the pancakes, turn your oven to 200 degrees and place an oven safe plate in the oven.  You will put your pancakes in the oven as you make them so they stay warm.  Melt a small amount of butter in a nonstick (this is very important!!) 6 inch skillet over medium heat.  Spoon in 1/3 C batter, then grab your bag of cinnamon swirl and pipe it on in a spiral, starting in the center.  Cook the pancake until the edges are dry and there are bubbles on the surface.  Carefully flip the pancake using a wide spatula and cook for another 45 seconds or so until set.  The pancake will not feel as firm as a regular pancake, but the second side never needs as much time!  Don't over cook or the sugar will burn.  To get the pancake out of the pan, I suggest pulling the oven rack out with a pot holder and flipping the pan upside down right over the plate so you don't get cinnamon sugar goo all over the spatula.  After you've removed the pancake, wipe the pan out with a folded paper towel, and for the love of all that is holy, be CAREFUL because molten cinnamon sugar is extremely painful!  Make sure to get all the sugar mixture or it will burn onto the next pancake.  Proceed in the same way with all the other pancakes.

Once all the pancakes have been made, make the icing.  Place the cream cheese and butter in a microwave safe bowl and microwave until butter has melted.  Whisk until smooth, then whisk in the vanilla extract.  Whisk in the powdered sugar a little at a time until it's as thick as you would like.  Drizzle the icing over the pancakes to serve.