Okay, so this isn't really Greek- it's more Greek inspired and I'm willing to bet anyone from Greece would be horrified at how unauthentic it is- but it sure tastes good!  The recipe is from McCormick and my mom's best friend printed out a copy for me to try about 10 years ago.  I made it soon after and my mother and I both liked it a lot!  Over the years I've made it for several people and they've all liked it, too.  A friend of mine who never eats leftovers was even excited to have it again the next night.  It looks like your standard quick 1 dish dinner recipe, but the addition of ground cinnamon and feta cheese really set it apart.  If you're suspicious of the cinnamon or especially sensitive to spices, you can try halving it, but I do encourage you to at least use some cinnamon as it really does a lot for the flavor.  This is a slightly tweaked double batch of the original recipe so it makes a lot (I make a big batch because we like it so much and it freezes well), but if you don't want lots of leftovers, just use the amounts in the original recipe to guide you.

Sorry about the rotini pasta in the photo.  I've made this recipe many times and have always used penne, but ended up with tricolor rotini this one time!  It was good, but penne holds up better against everything else going on in the dish. 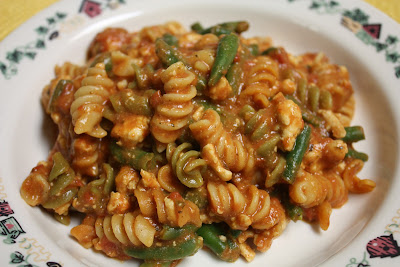 Heat oil in a large skillet over medium.  Crumble in ground turkey and cook until browned, stirring frequently.  Stir in tomato products and spices until well combined, then stir in pasta.  Reduce heat and simmer over low, stirring occasionally, until pasta is almost done, about 10 minutes.  Remove lid and stir in green beans and feta.  Simmer, covered, until beans and pasta are tender.

Yield: 10 servings
Posted by Cheese with Noodles at 11:24 PM